Fans Troll Rams, Cardinals For Providing The Most Uninspiring QB Matchup Of The Season 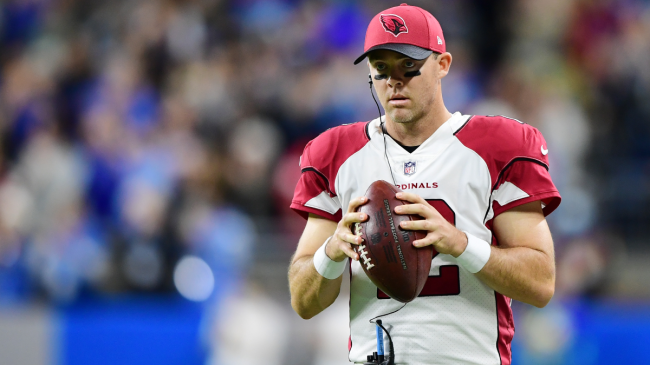 Some late scratches at the quarterback position have NFL fans bracing for a potentially awful showdown between a pair of 2021 playoff teams. Division rivals Los Angeles and Arizona square off in SoFi Stadium Sunday with the loser falling to the cellar of the NFC West standings.

If those numbers weren’t uninspiring enough, some news at the QB position has given fans a reason to change the channel come 4:30 PM.

Colt McCoy and John Wolford will start for the Cardinals and Rams.

With both teams’ leading passers nursing injuries, viewers will be presented with a meeting of the backups. Matt Stafford suffered a concussion last week, which will keep him out of the lineup in Week 10. Kyler Murray won’t suit up under center as he deals with a hamstring injury.

That gives Colt McCoy and John Wolford an opportunity to showcase their talents in a huge divisional rivalry.

McCoy hasn’t played this year, but he did throw for 740 yards and three scores last season, leading the Cardinals to a pair of wins over his three starts. The gunslinger completed 75% of his passes in Kyler Murray’s absence in 2021.

As for Wolford, he hasn’t started a game under center since 2020, though he produced a win for the Rams after passing for 231 yards. He’s also yet to see the field this season.

The lack of star power has fans less than eager to tune in for the afternoon contest. Many posted their reactions to seeing the news on social media.

One fan wrote, “John Wolford vs Colt McCoy on my TV today, I’m sick,” after hearing that both starting signal callers were out of action. He wasn’t the only one sharing this sentiment.

This person posted, “Having to watch Colt McCoy vs John Wolford later might by my breaking point for the NFL this year.” It doesn’t get much worse than this.

This fan’s reaction sums up everyone’s opinion on the uninspiring matchup. “John Wolford vs Colt McCoy. Just the type of 4:25 game we all asked for.”

John Wolford vs Colt McCoy. Just the type of 4:25 game we all asked for. https://t.co/wa9AeWSI4f

The immediate reaction hasn’t been kind to either McCoy or Wolford. Let’s see if they can exceed expectations and prove the doubters wrong.