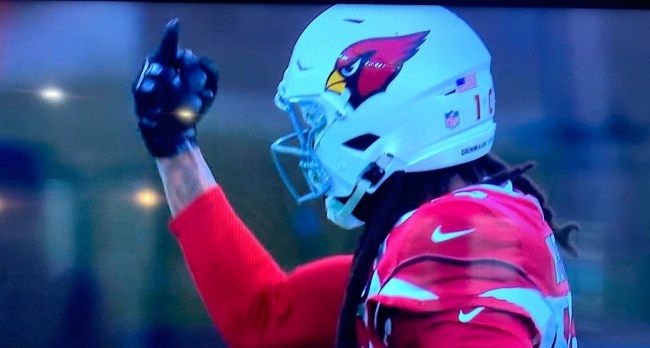 Cardinals wide receiver DeAndre Hopkins had a bone to pick with the refs in the Cardinals-Rams game.

On Sunday, the Cardinals were eliminated from the playoffs and a ticked off Hopkins was annoyed when he was called for an offensive pass interference in the game.

DeAndre Hopkins got called for OPI on this play but this just truly shows he is the ultimate ball winner. He’s going to try and catch everything no matter what’s in his way. pic.twitter.com/UAUa2hlF5e

Hopkins went on to flip off the refS over the call.

Probably wasn’t the smartest idea by DeAndre Hopkins to flip the ref the bird after the OPI call. pic.twitter.com/TUkyqIfohb

After the game, Hopkins took to Twitter to blast the refS for calling pass interference on him.

This got called a P.I as if the defender was off balance already. Don’t mention he’s not even going for the ball @NFL https://t.co/YGbSK9qXD7

But yet this isn’t called a P.I @NFL https://t.co/FJUbdNqTfy

There’s a good chance D-Hop is getting fined by the NFL over his reaction.