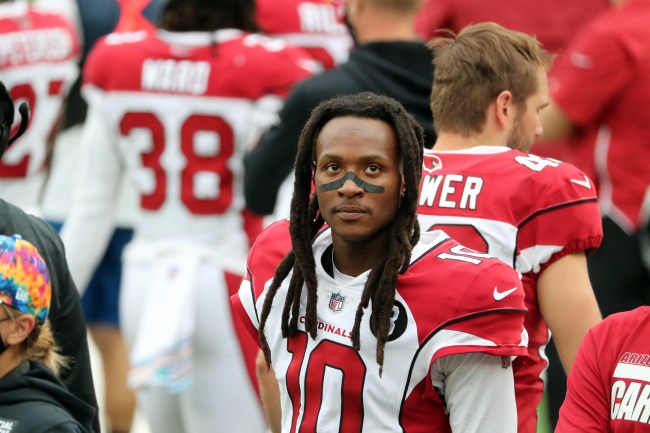 It appears that DeAndre Hopkins had a run-in with Trump supporters on his way to the stadium before Sunday night’s Cardinals-Seahawks game.

According to several Twitter users, Hopkins drove his Ferrari through a Phoenix “Trump Train” on Sunday and flipped off Trump supporters while making his way through traffic.

People participating in a caravan of hundreds of vehicles circling Valley highways as a parade of sorts for President Donald Trump say Arizona Cardinals wide receiver DeAndre Hopkins swerved through the caravan and flipped people off.

People who said they were in the caravan posted photos on Twitter of Hopkins giving the middle finger while driving a Ferrari convertible around 1:30 p.m. In the images, he is wearing a distinctive shirt that he was seen wearing when he arrived at State Farm Stadium later that afternoon.

Here are the photographs of Hopkins allegedly flipping off Trump supporters.

@DeAndreHopkins My 8 yr old son was in one of the cars you were swerving in and out of as you were disrupting the PHX Trump Train drive and trying to cause an accident. You're a piece of trash. Make your political statements, but you out people at risk today. @espn @AZCardinals pic.twitter.com/7tAuuyM5Or

@AZCardinals this is one of your own Deandre Hopkins flipping off people. Apparently weaving in and out of traffic during a Trump rally. Maybe he can set the example as a public figure and let people exercise their 1st amendment right. Great behavior from a Cardinal. pic.twitter.com/NgIzvmyrL2

I was a huge fan of @DeAndreHopkins @AZCardinals, but im disappointed.. I hope you make a statement. @LarryFitzgerald would never do this.. I was a part of the @realDonaldTrump Train in Arizona today. It wasn't very respectful bro.. pic.twitter.com/MlZFtfbDlV

We’ll have to wait and see if the Cardinals or the NFL address Hopkins’ alleged behavior on Monday.