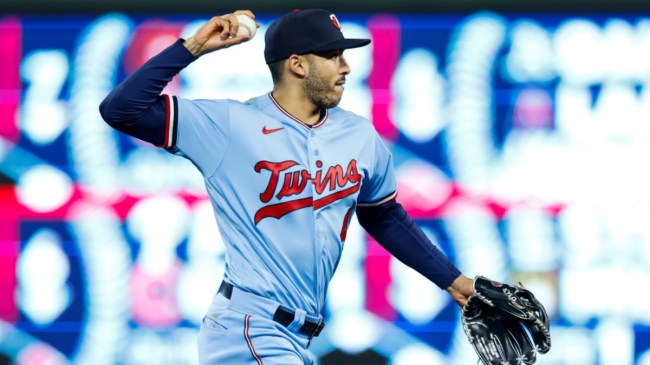 When the MLB went into a lockout at the end of 2021, one of the biggest remaining loose ends in free agency was where Carlos Correa would end up. After the lockout ended, he signed a 3-year deal worth $105.3 million with the Minnesota Twins.

While that contract was presented as a 3-year deal, it was really a 1-year deal with player options after each of the first two years. As the first year of that deal is coming to a close, the expectation is that Correa is going to decline his option with the Twins and re-enter free agency.

Today, he was asked if he would potentially return to the Twins after this season and he gave an incredible answer, revealing his thoughts ahead of his potential free agency this winter.

“I go to the Dior store. When I want something, I get it… I’m the product here. If they want my product, they’ve just got to come get it.” -Carlos Correa on a potential return to the Twins pic.twitter.com/XndJJeCUEq

When I go to the mall and I go to the Dior store, when I buy something, I get it. I don’t ask how much it costs, and I buy it. If you really want something, you just go get it. I’m the product here. If they want my product, they’ve just got to come get it.

That was a pretty awesome way of telling the Twins to back up the Brink’s truck if they want him to return to the team next season.

Correa is sure to attract plenty of attention if he opts out of his contract and some of that attention will probably come from teams that make the playoffs this season.

It looks like the Twins better be ready to spend this offseason if they want to keep their newest star.