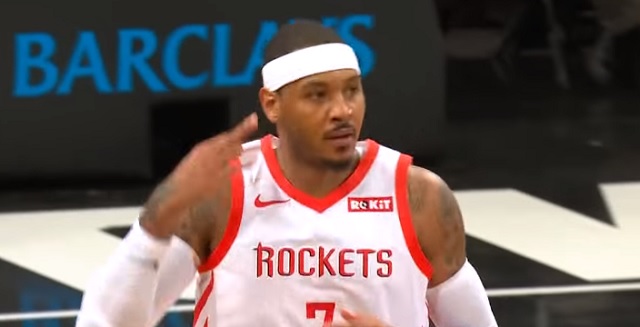 Carmelo Anthony is once again in the tabloids for reportedly cheating on his wife but this time he’s firing back and attempting to clear his name of ANY wrongdoing.

Melo’s infidelity rumors started when a gossip blog called TheYBF released photos of Anthony on a yacht in France with a mystery woman.

👀 Looks like #CarmeloAnthony sent his wife #LaLaAnthony that sweet birthday message yesterday while boo’d up with another woman in the south of France. A mess. Link in profile or swipe up in Stories for the receipts. https://t.co/pZOQ2cLCuL pic.twitter.com/Dqo2509HdC

While Carmelo Anthony was writing a sappy Instagram birthday post to his “wife” LaLa Anthony yesterday, he was doing so from a yacht in France…with another woman. The receipts inside.

LaLa seemed to be having the best birthday ever yesterday, posting up a bomb new photoshoot in celebration and sharing all the sweet messages from her celeb friends. The “Power” actress also had a big birthday party last night. The one person we noticed was missing – her NBA baller husband Carmelo. Now we know it’s because he was parlaying in the south of France with a new mystery woman.

The two were definitely not trying to hide, and seemed extra comfortable with each other while yachting it up. Carmelo was also seen hitting the ocean with some water toys while she looked on from the boat giving him a flirtatious wave.

Melo immediately spoke to TMZ to shoot down the rumor by claiming the woman has a husband and a family onboard the yacht.

Carmelo tells TMZ Sports … the woman is actually on the yacht WITH HER HUSBAND AND THE REST OF HER FAMILY — and Carmelo is just on board as a friend while in Europe on a business retreat.

Melo says the false reports are “affecting my family” — and he’s calling for everyone to correct their reporting because it’s hurting him, hurting the other woman and other people involved.

“All them bloggers that’s trying to put that out there, that sh*t is not cool at all,” Melo said.

“That’s not cool at all. Let that family be they family, they married.”

“The only reason i’m addressing this is because this is affecting my family now and you got me out here looking crazy. Usually I won’t address this, but I had to address this.”

“Can’t let this one slide, because this sh*t ain’t cool no more. Peace.”

Apparently has been in France touring with Jordan Brand.

There’s also a good chance Melo signs with the Lakers in the next coming weeks.