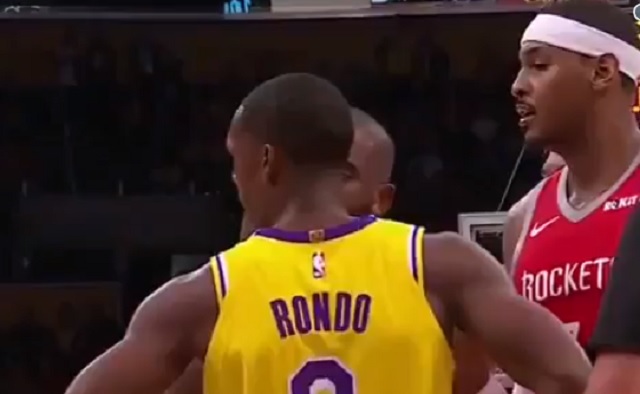 A wild brawl broke out late last night between the Lakers and the Rockets when Chris Paul and Rajon Rondo began throwing haymakers at each other all because Paul believed Rondo spit on him.

Rondo in the back icing his hand after cleaning Chris Paul's clock with this left. CP3 dotted up, and he deserved it for the finger in the facepic.twitter.com/ByOjkk6WRi

Rondo denied spitting on Paul after the game and Lakers officials are backing him up after reviewing the video.

Sources: Lakers officials watched tape and are backing Rajon Rondo’s contention that he didn’t spit on Chris Paul. Meanwhile, CP3 and Rockets are insisting that Rondo did spit. “Lot of history between them,” one source connected to both players says.

Paul’s teammate Carmelo Anthony backed up his teammate and told the media that Rondo did spit on CP3.

Carmelo Anthony: "It was bullsh!t, plain and simple. Unacceptable. We all know what happened. What happened was unacceptable, shouldn’t have happened. "

Spit? "Yeah, that's unacceptable. You don't do that … in sports, on the streets. That's blatant disrespectful right there."

So multiple Rockets say Rondo spit at Paul. The Lakers say he didn't. NBA will investigate every moment, but I suspect Roger McDowell was a second spitter.

The Action Network’s Rob Perez took a closer look at the video and it appears that Melo was the one who spit on Paul and not Rondo.

It probably doesn’t matter at this point if Rondo spit at all because he and Paul are going to get lengthy suspensions for the brawl.

With the NBA’s Kiki VanDeWeghe on the scene at Staples, investigation into Rockets-Lakers fight is underway tonight and there is potential for suspensions as soon as Sunday, league source tells ESPN. Rockets play Clippers on a back-to-back.