Carmelo Anthony Never Wanted To Leave The Nuggets, Said One Move The Team Made Pushed Him To Ask For A Trade 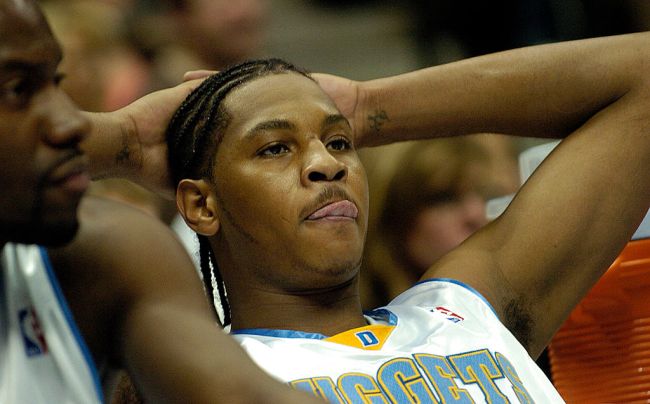 Carmelo Anthony never wanted to be a New York Knick or make multiple stops during his NBA career, he wanted to stay with the team that drafted him third-overall in 2003, the Denver Nuggets.

Melo admitted this during a recent appearance on Showtime’s ‘All The Smoke‘ podcast. He revealed that he never wanted to leave Denver, but after the franchise made a certain move following the 2009 season, he had to force his hand.

“I never told people that. But I never wanted to leave Denver. But it’s like they put my back against the wall. We go to the Western Conference Finals in 09. What are you supposed to do? You’re supposed to build on that. You’re supposed to add pieces, plug and play, don’t mess the core up,” Anthony explained.

Anthony is referring to the Nuggets trading away Dahntay Jones when talking about messing the core up. Jones was a key piece during the Nuggets’ run, and when they got rid of him, the writing seemed to be on the wall for Anthony that he better get out while he still had plenty left in the tank.

“On that team, Dahntay was a key piece on that team. Get rid of Dahntay Jones. They’re like, ‘We ain’t re-signing Chauncey [Billups]. We’re about to trade J.R. [Smith].’ K-Mart (Kenyon Martin) – contracts is up, and the lockout’s coming?

“So, I’m not about to rebuild. I’m not going to rebuild after we done went to the Western Conference Finals. We’re supposed to be building, not rebuilding. And I went to them. I’m like, ‘I don’t want to go, but if y’all going to rebuild, it’s time for me to go somewhere else.’”

Melo also recently shared that the Detroit Pistons told him that they would be drafting him and that he still thinks about the ‘what if’ if Detroit would have selected him. Instead, the Pistons drafted Darko Milicic with the second-overall pick.

The rest is history from that point. Anthony ended up being dealt to the Knicks in February of 2011 where he led the team to just one playoff series win in his six seasons in the Big Apple.