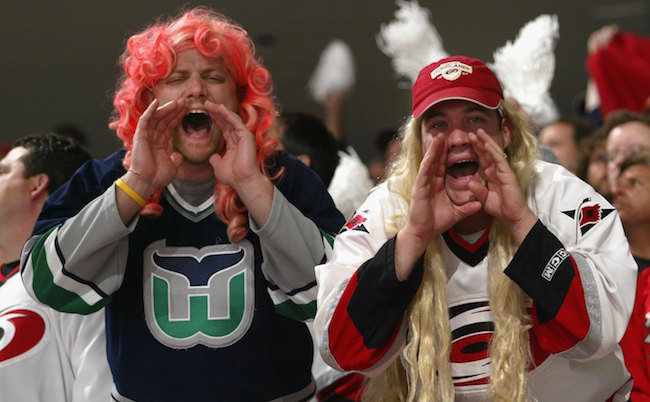 If you’re a fan of ironic sporting apparel, then you’re probably aware that there are certain teams out there who are able to boost your Hipster Score unlike any others. Most people dip their toes in the water by buying some piece of clothing with the original Mighty Ducks logo before getting a Quebec Nordiques dad hat and a Pedro Martinez Montreal Expos jersey tee— a point at which many people pivot and enter the rabbithole that is known as “minor league baseball memoribia.”

However, if you really take your throwback gear game seriously, there’s one only piece you need to have in your collection: a Hartford Whalers jersey. You might be deterred by its relatively high cost and the fact that there’s close to literally no reason for a normal person to ever wear a hockey jersey, but it’s guaranteed to become the crown jewel of your collection.

For almost two decades, the Whalers were basically the only reason anyone without an unhealthy interest in the insurance industry had to come to Hartford, and the city has been struggling to find literally any other way to attract people to visit since the franchise became the Carolina Hurricanes after leaving Connecticut in 1997.

The team has gradually distanced itself from its former identity, but it appears they might actually start paying tribute to their roots after the franchise was purchased by Tom Dundon last year. The new owner recently came onto the radio in Raliegh and said he was more than ready to tap into the lucrative nostalgia market:

“I think we should have a store that sells that Whalers merchandise online and we should explore playing games in that jersey and selling that gear. It’s part of the legacy. And I just like cool stuff. If we don’t, it will mean something went wrong.”

Deadspin also shared a video taken by a fan during a break at PNC Arena on Tuesday that captured the PA system blasting the Whalers’ iconic “Brass Bonanza” fight song:

The past can’t come back quick enough.