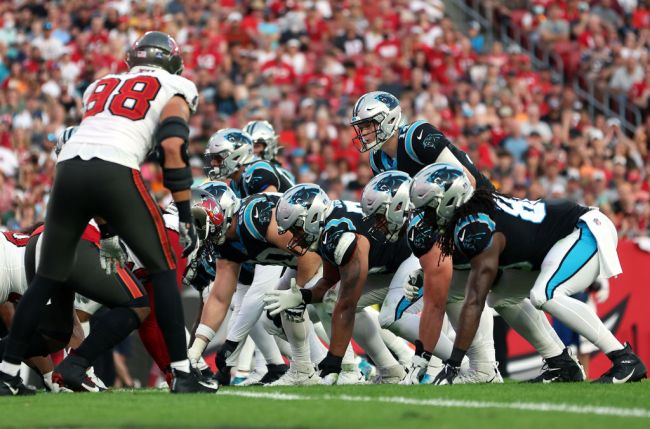 Last season was a disaster for the Carolina Panthers. They rotated through an awful quarterback platoon of Sam Darnold, Cam Newton, and PJ Walker. Christian McCaffrey spent most of the year injured. They finished last in the NFC South.

The only positive to come from their 5-12 season seemed to be that it earned them the 6th pick in the NFL Draft. Now it is being reported that they might not actually want the pick. According to the NFL Network’s Mike Giardi, they have been talking to numerous teams about trying to move back in the draft.

Important to note that, per league sources, the #Panthers have talked to numerous teams about moving back from 6 (they don’t have another pick until #137). Picking a QB in top 10 might be too much but picking one in the mid first is more palatable and gets them more draft capital https://t.co/8RleRXQxke

The Panthers trying to move back comes as a bit of a surprise as it was expected that the Panthers would try to find stability at the quarterback position with the 6th pick in the draft. It is also hard to see who exactly would be willing to make the Panthers a big enough offer to make moving back worth it.

The Seahawks, Steelers, and Falcons are likely the only teams who would be interested in pursuing one of the draft’s top QB options who are also picking behind the Panthers. The Seahawks and Falcons own the 8th and 9th picks in the draft, so they aren’t going to break the bank to move to 6.

If the Panthers can secure a move that gets them more draft capital in a better class next season while still allowing them to draft a quarterback they see as a viable candidate to become their franchise QB, the move would make a lot of sense. It’s just difficult to see them getting that offer.