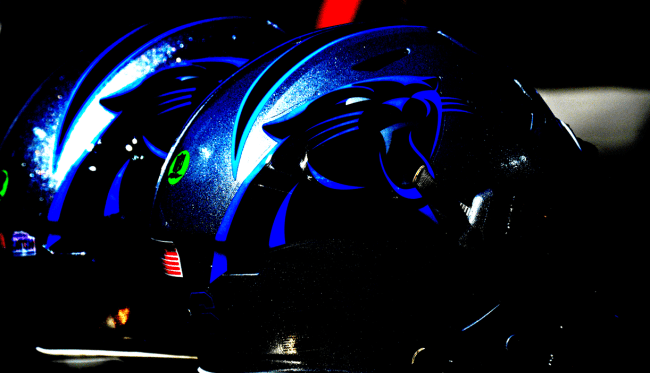 There is just something about an all black uniform that screams badass. It doesn’t matter if the team wearing the blacked out gear is good or not. Just look at the Raiders. They have only been to the playoffs twice in the past 19 years (losing in the Wild Card round both times) and yet they still look cool AF when they step on the field every week.

The Carolina Panthers certainly are a match for that sort of lack of success sitting at 2-7 on the year, but this coming Thursday night when PJ Walker, Baker Mayfield and crew hit the gridiron they are going to be looking sweet.

We know this because on Tuesday the Panthers revealed some new black helmets to go along with their all black uniforms for this Thursday night’s game against the Falcons.

You don’t suppose these new blacked out Panthers unis have anything to do with the fact that Black Panther: Wakanda Forever premieres Thursday night, do you?

Here’s an even better look at the new Panthers fits…

The Panthers are debuting their black helmets to go along with their all black uniforms this Thursday night against the Falcons. pic.twitter.com/73ELf1jSx5

NFL fans think the Panthers’ all-black uniforms and helmets are pretty good, even if the team isn’t

“I don’t care about their season. Set that aside for a second,” one Panthers fan tweeted. “These uniforms are CLEAN the black and blue goes hard.”

What’s with the Spider-Man pose

“I’m just a boy, standing in front of a team, asking them to make this the full time helmet,” another wrote.

“These should be permanent. And should’ve been a long time ago,” commented another fan.

Literally the only reason to watch the game Thursday will be for the all black.

The only thing that could make this Panthers versus Falcons Thursday night match up better would be if Atlanta accidentally showed up wearing their all-black uniforms.

All black for Atlanta today. The Falcons are 1-6 in all black since 2020 (0-2 last season)#DirtyBirds | #AtlantaFalcons pic.twitter.com/76vMJdS34a

Then maybe someone can turn the stadium lights out because this game looks like it is going to be yet another TNF stinker.