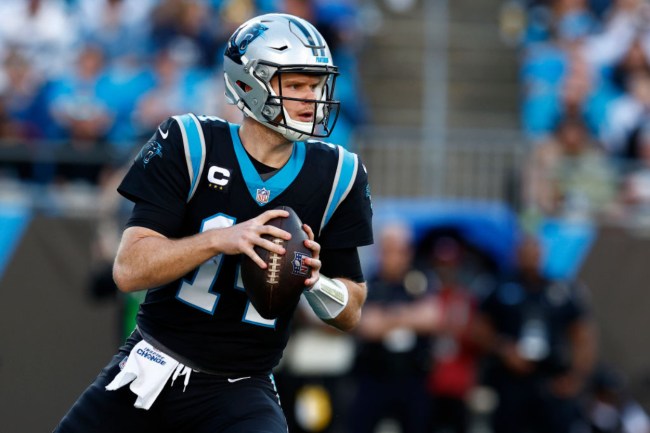 After the Carolina Panthers wrapped up their third straight five-win season this past year it was safe to assume they’d be exploring every option imaginable to shake things up, specifically in the quarterback room.

Sam Darnold struggled mightily in his 12 games for the Panthers last season throwing nine touchdowns and 13 interceptions. While he’s signed thru the 2022 season, all signs pointed to the Panthers looking for a replacement if one presented itself.

That may have indeed been Carolina’s plan, but with the QB market shrinking, the Panthers have changed their tune about Darnold.

Panthers GM Scott Fitterer spoke with the media on Friday and made it clear that Darnold is QB1 at the moment and that his development is key going into next season.

"The whole key is bringing Sam [Darnold] along,'' Panthers GM Scott Fitterer said. "He's in the lead for that job.'' After the season Fitterer said the QB job was "open.''

Baker Mayfield is still looking for a new home after the Cleveland Browns traded for Deshaun Watson, but all reports point to the Panthers not being interested in trading for him.

It would be shocking at this point not to see Carolina draft a quarterback with the No. 6 overall pick in the upcoming NFL Draft. Bringing a rookie in to compete with Darnold is one thing, but if that’s the only move made then it’s a relatively safe bet that Darnold begins the season as QB1 in Carolina.

Choosing not to believe this https://t.co/U5AhyT2W6W

Every time I think the #Panthers are making some smart moves to rebuild the team, someone mentions D-a-r-n-o-l-d and the starting job in the same breath https://t.co/gYyJXRp7lc