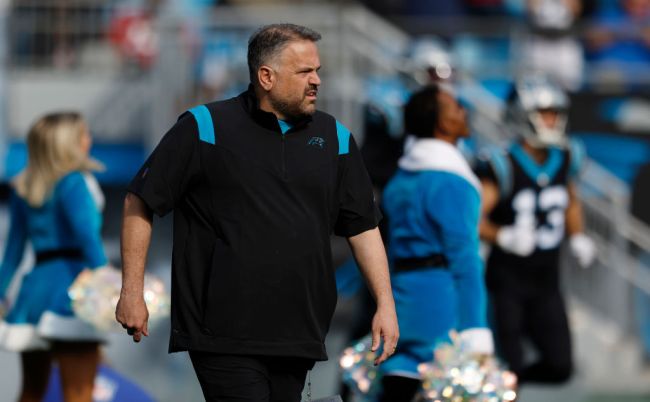 When the Carolina Panthers traded for Baker Mayfield this offseason, football fans definitely weren’t expecting the move to lead to a quarterback competition in Carolina. However, it seems the Panthers haven’t gotten the memo.

Since the trade, Panthers head coach Matt Rhule has insisted that there is a competition between Baker Mayfield and Sam Darnold to be the team’s starting quarterback next season and so far he hasn’t been willing to change that because of anything he’s seen at training camp.

Now, he has revealed when he might finally be ready to make a decision on his starting quarterback. According to Rhule, he won’t be ready to pick a quarterback until at least after the team’s game against the New England Patriots in Week 2 of the preseason.

I’m not putting a timetable on the quarterback position until after we get back from the Patriots week. The Patriots week is a true litmus test for us. That will really show us where guys are.

It remains unclear exactly what it is that Rhule is expecting to see between now and the end of that matchup with the Pats that is going to change who should be starting at quarterback for the Panthers.

Sam Darnold has thrown more interceptions than touchdowns in each of his past 2 seasons and proved last year that the Panthers can’t win with him at quarterback.

Baker has at least proven to be a capable starter in the NFL over the course of his career, has won a playoff game, and even had better numbers than Darnold last year while playing through an injury and throwing to worse receivers.

Despite all of that, it seems the Panthers are dedicated to taking way longer than everybody else to figure out who should obviously be their starter for this season.