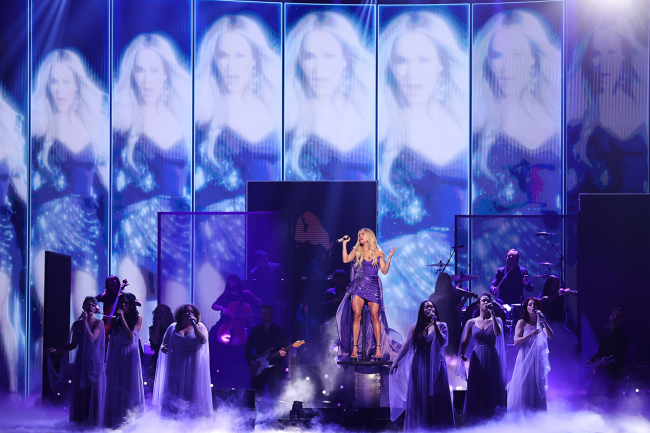 When it’s all said and done, Carrie Underwood will go down as one of the greatest musicians of all-time. While her vocals are one thing, her insanely strong legs are another.

Once again, while her performance of the song was amazing, it was her legs that stole the show. The polite way of describing her legs may be ‘toned,’ but much like that of an athlete, they are absolute jacked and she is absolutely shredded.

As Underwood performed on the stage at the Grammys, her legs were all anyone could talk about and they sent shockwaves across the internet.

and the Grammy goes to…

My next appreciation tweet is for Carrie Underwood’s legs. #GRAMMYs

I’m going back to the gym IMMEDIATELY. @carrieunderwood legs are to die for! See those quads poppin?…She lifts😍 pic.twitter.com/HkueIzYACU

Can we create a #Grammys category for both @carrieunderwood’s voice and her legs?? 👏🏻👏🏻👏🏻👏🏻

Carrie Underwood sounds phenomenal, but I can’t even concentrate cause she got some legs on her. Give up the routine sis!!!#GRAMMYs pic.twitter.com/9Ip9KiKGFB

Round of applause for Carrie Underwood's legs #GRAMMYs pic.twitter.com/V1mVBXsolN

In fact, when compared to some of the strongest players in the NFL, Underwood and her legs stand their ground. Literally.

Underwood’s legs have been a large point of conversation in the past. She is known for being fit and works really hard to get the results she wants.

.@carrieunderwood shares the secret on how to get Carrie Underwood legs 🏋️‍♀️⤵️

Watch more on a special livestream of #CircleSessions hosted by @OnePanNan featuring Carrie Underwood tonight at 8:30/7:30c pm on our Facebook, YouTube & Twitter before #OpryLive pic.twitter.com/HPpPlBIXKr

For those who are wondering what she does, Underwood has shared her leg routine in the past. In 2020, she told Women’s Health that her leg workout consisted of six supersets of three moves, each done in three or four sets.

Underwood also incorporates cardio into her routine, running 1.25 miles every 15 minutes to run five miles after an hour. In addition, she incorporates the following on and off:

As for her diet, Underwood has shared some of her staples in the past.

If the whole music thing doesn’t work out, or if she ever gets bored and wants to try something new, she would fit right in next to ‘The Quadfather’ A.J. Dillon or ‘Squads’ Saquon Barkley in an NFL backfield.