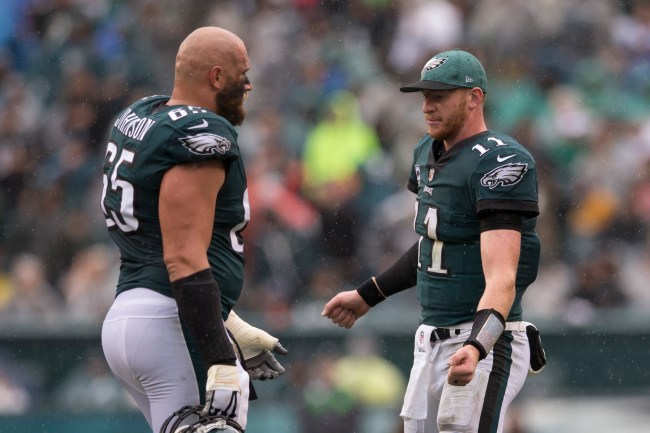 Carson Wentz just got paid, guys. And, as my esteemed colleague here at BroBible, Douglas Charles, pointed out, not everyone was thrilled to find out that the former No. 2 overall pick just got the most guaranteed money in NFL history. Can’t really blame the haters much, though, considering Wentz wasn’t the one who led the Eagles to a Super Bowl title a couple seasons ago — that was the since-departed Nick Foles — along with the fact that Carson Wentz has been able to stay healthy the past few years. That didn’t matter to Philly, though, because they’re all in on him.

With Carson Wentz just securing a reported $107.9 million, which could become up to $144 million total, the pressure’s now on for him to prove he’s worth that type of money. Time will tell if that’s the case, but, for now, the quarterback should be ready for opposing players to want to rip his head off even more — with Dallas Cowboys Pro Bowler DeMarcus Lawrence atop that list.

After finding out the news about Wentz’s new deal, Lawrence made sure he tweeted his thoughts.

The richer they get, the better it feels when we humble they a**.

After seeing what an NFC East rival said, the Eagles’ offensive lineman, Lane Johnson, came to the support of his quarterback, responding in kind to Lawrence’s claim.

This is all in good fun, and a pretty lame exchange, but the fact that it’s happening in June only makes me even more stoked about the NFL coming back soon. We’re less than 100 days away from that, so can we just keep this type of shit-talking going on between players until then? The summer will be a helluva lot more interesting if we can — and it’ll be fun to watch what happens when Lawrence lines up against Johnson as he tries to sack the newly-paid Carson Wentz during the teams’ two matchups on October 20th and December 22nd this season. They just gave one another a little more motivation not to lose that one-on-one battle.