Reactions To Carson Wentz Getting A Record $107+ Million In Guaranteed Money Are Mixed, To Say The Least 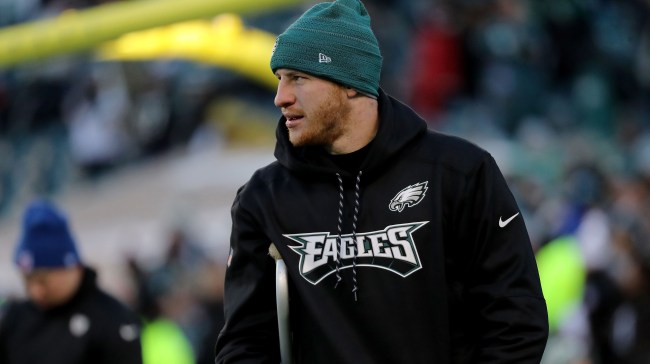 What do you think, Philly fans? The Eagles have now guaranteed a reported $107.9 million, and up to $144 million total, to keep Carson Wentz as the team’s quarterback for the next four seasons.

Before you answer, let’s take a trip in the wayback machine to January of 2019.

Back then, the Ole Gunslinger Brett Favre said he believed that the Eagles should keep Nick Foles and get rid of Wentz. He also explained why and made some very salient points.

I added these facts to the argument…

• Wentz has had a torn ACL and a stress fracture in his back, ending two of his three seasons in the league prematurely.

Since then, Foles went on to sign with the Jacksonville Jaguars, also on a four-year deal, but his contract is “only” worth up to $88 million, around $45 million of it guaranteed.

Now, what do you think of Wentz’s record-breaking deal?

Wentz seems pretty happy with it.

Donovan McNabb and other Eagles players, both current and past, as well as most of the team’s fans like it.

Congratulations to @cj_wentz and the @Eagles for extending their partnership . Great things ahead.

Yessir my brother!!! Earned not given!No one better to lead this organization and city! #FlyEaglesFly pic.twitter.com/rJ3ebVmg76

Congrats to the bro @cj_wentz WORTH EVERY PENNY

Carson Wentz… worth every single penny.

Fact: The Eagles wouldn’t have been in position to win a Super Bowl without Carson Wentz.

What has Carson Wentz done to deserve that contract? Am I missing something?

Lmfao. Carson Wentz has never played in the playoffs. Nick Foles is a Super Bowl MVP

Absolutely ridiculous! Absolutely completely way over paid unnecessary to a QB that hasn’t done a thing! This is not a soon to be Hall Of Fame candidate. Atrocious! The @NFL is getting more talented by the year! many QB’s are due out. This contract will haunt the Eagles.

*me sprinting towards the nearest brick wall* pic.twitter.com/phuCgvYcUg