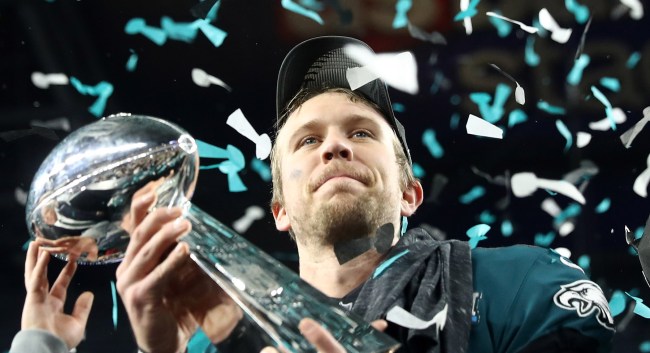 Now that the Philadelphia Eagles 2018 season has come to an end they have some big decisions to make and the most important one might be deciding which quarterback to hitch their wagon to for the future, 26-year-old Carson Wentz or 29-year-old Big D**k Nick Foles?

Wentz has had a torn ACL and a stress fracture in his back, ending two of his three seasons in the league prematurely.

So who would you keep if you were the Eagles?

NFL Hall of Famer Brett Favre says he thinks the Eagles should keep the guy with the Super Bowl win as their quarterback and deal Wentz, and he explained why on his SiriusXM radio show.

“No disrespect at all to Carson Wentz. I think he’s already proven that he’s a great quarterback,” Favre began. “Totally different than Nick Foles. Nick Foles, to me, is more of a (Tom) Brady-esque type quarterback. Very limited in what he can do but very, very good in what he does. He’s a pure pocket passer and he’s great at dishing it out and he’s proven that he’s clutch. He did it this past week, he did it last year, he’s done it time and time again, and he’s proven that he can win the big games. That, I think, is what we have to look at, or the Eagles, or anyone in a similar situation — it’s about winning, it’s about being clutch, doing really what you expect your players to do. And he does it as well as anyone.”

“You know the old saying, ‘Dance with the one who brung you?’ They’re both young and can you keep going with both of them? I don’t think so, so you’re going to have to make a decision but I think it is a difficult decision,” Favre continued.”

“Again, I don’t want to come across as knocking Carson Wentz at all because I’m not. I think a lot of him. But I would go with Nick Foles, I really would. … They are both good. I just, I really like what I’ve seen from both guys but in particular Nick Foles, especially considering the circumstances in which he has come in.”

Do you agree with Favre? Is there any way the Eagles could possibly keep both quarterbacks? Pederson has already confirmed the team will be going with Wentz as their starter next season.