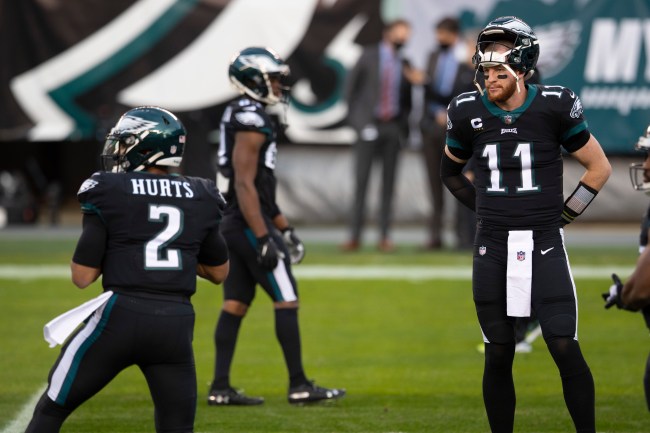 The Carson Wentz era in Philly could be coming to an abrupt close.

Just last week backup rookie QB Jalen Hurts took over for Wentz and led the team to a big win against the New Orleans Saints.

Jalen Hurts leads the Eagles in an upset win over the Saints, 24-21 🔥

According to ESPN’s Adam Schefter, Wentz isn’t happy being the backup in Philadelphia and would prefer to get traded or let go if Hurts continues to be named the starter by the team.

Carson Wentz is not interested in being a backup quarterback and would want to move on from the Eagles if the current situation — with Jalen Hurts starting under center — continues in Philadelphia, sources connected to the team told ESPN.

Although the Eagles’ quarterback situation remains fluid with three games left this season, Wentz is not pleased with the way events have unfolded in the organization, according to sources.

The Eagles have a big decision to make this offseason about whether or not they want to keep Wentz on the roster.

Team sources told ESPN earlier this month that the Eagles intend to keep Wentz despite his season-long struggles and want him be a major part of their team going forward.

But if the Eagles ultimately decide to move on from Wentz, they must make that decision by the second day of the 2021 league year — sometime in mid-March — because on the third day of the league year, his $22 million base salary for 2022 becomes fully guaranteed and his 2021 roster bonus of $10 million also is paid out.

There are still three games left and Wentz could possibly win back his starting job but if Hurts keeps playing well there’s a very good possibility Wentz is on another team next season.