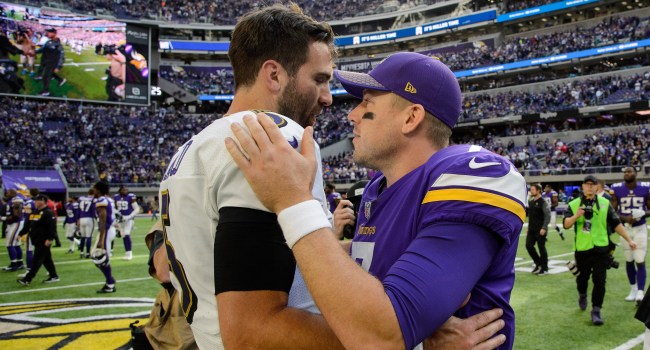 We’re not sure why.

During Keenum’s seven years in the NFL he has been replaced five times… by Brian Hoyer in Houston, Ryan Mallett in Houston, Nick Foles in St. Louis, Jared Goff in Los Angeles, and Kirk Cousins in Minnesota.

It’s just what happens to him. The other quarterback doesn’t even have to be better than him (see Mallett, Ryan).

In fact, if you look at Flacco’s stats vs. Keenum’s stats at the same stage in their careers, they’re almost identical.

Now, it’s not like John Elway has a stellar record when it comes to acquiring quarterbacks in Denver (Brock Osweiler, Trevor Siemian, Paxton Lynch, Keenum).

Heck, over the last three years, Joe Flacco has been one of the worst starting quarterbacks in the NFL.

Among 34 qualified QBs over the last three years, Joe Flacco is second-worst in success rate (58%) and dead last in YPA (7.5) when his receiver was open (3+ yards of separation) per Next Gen Stats.

So, of course Flacco will probably be Denver’s starter in 2019 – something would come as a big shock to the incumbent, Keenum.

Speaking to Sports Spectrum, Keenum said about the trade…

“Elway called me that morning and we had a great conversation, which he didn’t have to do, and I appreciated that. I was definitely shocked, it was a surprise for us and I think probably for the first day or so that’s kind of what it was,” said Keenum. “But for us, we’re definitely disappointed, it’s not something we wanted to happen. I know that everybody’s doing their job, and John feels like that was a chance for him to help the Broncos out.”

Still have any doubts that Flacco will be starting for the Broncos come fall?

Over the last three seasons:

Yep. He’s definitely getting the job.