A Fan Was Bizarrely Kicked Out Of Cavs-Lakers Game For Holding Up Shirt Saying ‘LeBron Is A Racist’, ‘Gloria Goes West’ 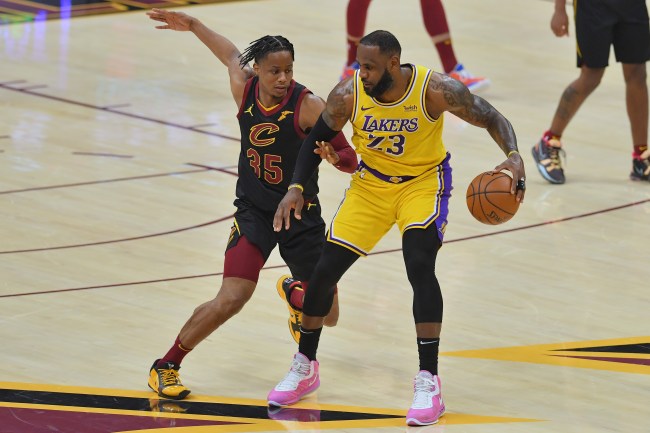 A limited number of Cavs fans were allowed into Rocket Mortgage FieldHouse to attend Monday night’s game between the Los Angeles Lakers and Cleveland Cavaliers and apparently, one fan got a bit too rowdy with his trolling of LeBron James.

According to a report from Cleveland.com, one of the fans allowed inside of the arena got kicked out by security for bizarrely holding up T-shirts with messages that included several insults directed at LeBron.

The man held up t-shirts that read: “LeBron is a racist,” “LeBron is a narcissist,” “Gloria Goes West. Starring LBJ as king narcissist”— an apparent reference to his mother Gloria James— and another one that contained a sexual innuendo.

A Cleveland police officer and arena security guards confronted the man in Section 126, behind one of the baskets on the lower level of the arena, and asked to see the shirts to determine if they violated the fan’s code of conduct.

Apparently, the fan was aggressive as he was escorted out by police but was somehow not arrested.

The man “became extremely aggressive,” shouted at the officers and security guards and refused to show the shirt, according to police report.

The security guards told him he was kicked out. He continued shouting profanities, then lunged at the head security guard, grabbed her hands and hit her in the side, according to police.

The officers escorted him out of the arena. The man refused to leave and five times tried to run back into the stadium by trying to burrow his way through the guards and officers, according to police.

An officer reported that he shoved the man to the ground the fourth try. A Cleveland police commander arrived and the man shouted at her. She told the man if he tried entering the building again that officers would arrest him for trespassing. The man yelled at the officers as he walked away.