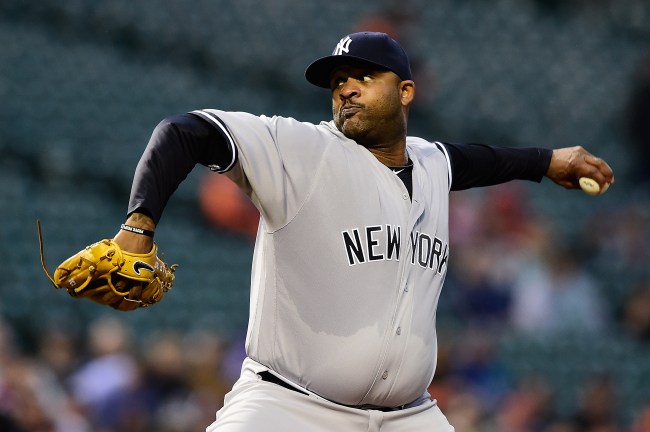 The New York Yankees absolutely thrashed the Tampa Bay Rays yesterday afternoon at Tropicana Field in St. Petersburg, Florida. The Bronx Bombers put on a hit show with 13 hits and 12 runs, beating the Rays 12-1 on the road during their last game at Tropicana Field this season.

The Yankees have already secured the AL Wild Card spot and are off to the postseason in a few days after the regular season comes to a close this Sunday. Pitcher CC Sabathia was making his final regular-season start yesterday and he needed to pitch through the 7th inning in order to hit a $500,000 bonus. Spoiler alert: he didn’t get the bonus.

What’s $500,000 to him? It’s still a lot of money, sure. But he definitely doesn’t need money. He’s doing just fine. It’s been a LONG ass time since he was considered rich, CC Sabathia has been wealthy for most of his adult life.

Sabathia entered Thursday’s game having pitched 148 innings this season. In what will be his final start of the year, he needed to last through the seventh in order to make it to 155 innings and receive the bonus.

But he was tossed by home-plate umpire Vic Carapazza in the bottom of the sixth inning after throwing a 92.5 mph cutter into Tampa Bay Rays catcher Jesus Sucre’s left leg.

“I don’t really make decisions based on money, I guess,” Sabathia said after the Yankees’ 12-1 win over the Rays. “Just felt like it was the right thing to do.”

Carapazza had issued warnings minutes prior, following a pitch in the top of the inning from Rays reliever Andrew Kittredge that sailed behind Yankees catcher Austin Romine’s head. After the warnings, the next batter to be thrown at or hit would lead to ejections.

“Any time you feel like your player’s safety is in jeopardy, all guys take exception to that,” Sabathia said.

Here he is getting tossed:

The Yankees manager came to the defense of CC Sabathia saying he understood the need to retaliate….Which is actually complete bullshit.

This all started earlier in the series when Yankees pitcher Masahiro Tanaka hit Rays outfielder Kevin Kiermaier in the foot and caused a hairline fracture. After that, the Yankees hit rays 1B Jake Bauers with a pitch earlier in the game yesterday.

Is it really retaliation when you’re the team who has hit two players on the opposing team? That’s just being a douche bag, CC. Full disclosure, I’m a Tampa Bay Rays fan.

This was only the 5th ejection of CC Sabathia’s career but it was the 2nd this year. It seems like this old man’s getting a little more feisty as he realizes his contributions on the mound aren’t what they once were.

After being ejected, CC hurled a “That was for you, bitch.” at the Tampa Bay Rays dugout without making any mention of who he was actually talking to. Was he trying to Tommy Tough Guy the entire dugout? When asked about his comments later, CC said he was ‘just yelling’ and didn’t even remember what he said.

Sounds like elderly dementia to me. The dude should just retire already.