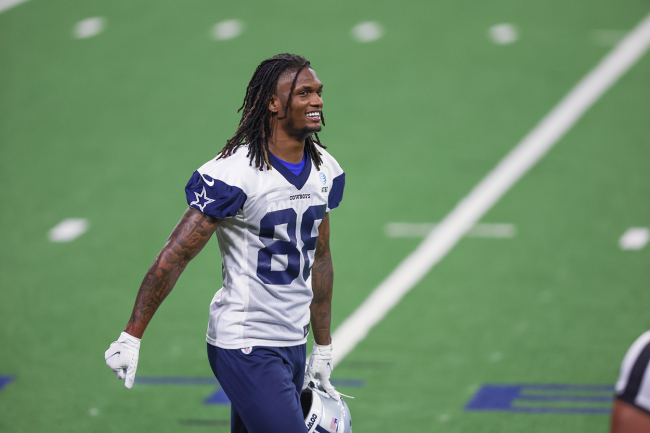 The University of Texas and the University of Oklahoma have a deep-rooted hatred for one another. As border rivals in the same conference, the Sooners and Longhorns take every opportunity to diss one another— as they should, because that is what makes sports fun.

On Thursday morning, as the Dallas Cowboys made their way onto the field for the first day of training camp, star wide receiver CeeDee Lamb got in a jab at his college rival almost immediately after stepping onto the grass. It was vicious and hilarious.

Texas and Oklahoma first played each other in 1900. After a few years on and off, the rivalry has been played every year since 1929. The Longhorns and Sooners have played 117 games against one another and the former leads the all-time series record 62-50-5.

However, the latter is on a four-year winning streak. Oklahoma has not lost to Texas in the Red River Shootout since 2017.

Lamb, who played receiver for the Sooners from 2017 to 2019, lost the rivalry game as a freshman. He did not lose again, giving him a 2-1 record over the Longhorns.

As a result, Lamb forever has bragging rights over Texas. Especially as his school continues to win— most recently mounting the largest comeback in the rivalry game’s history behind Caleb Williams.

Even if his team isn’t winning, the hatred is real, as Lamb displayed on Thursday.

As the 23-year-old receiver ran out onto the field for training camp, a fan shouted out “LET ME GET A BOOMER,” referring to Oklahoma’s Boomer/Sooner chant. Lamb, instead, threw a vicious ‘Horns Down’ to troll Texas.

Cowboys WR CeeDee Lamb arrived for the first training camp practice, and promptly throws up the Horns Down pic.twitter.com/mcnM32CtGf