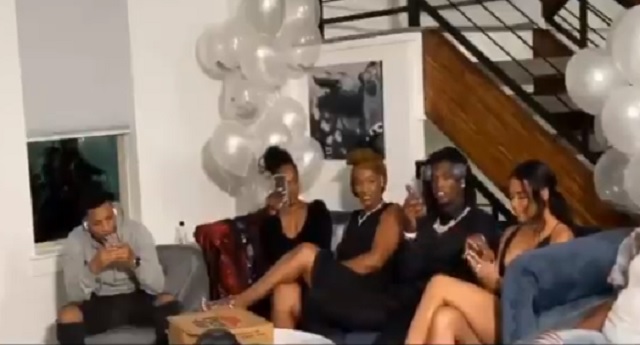 Oklahoma Sooners CeeDee Lamb might be on the market for a new girlfriend now that he’s in the NFL.

All night long, Lamb’s girlfriend who was seated next to him looked like she was bothered by something.

After the wide receiver was drafted by the Dallas Cowboys late in the first round she would later try to check his phone and Lamb wasn’t having it.

CeeDee's girl tried to check his phone and he was like NOPE LMAOOOO pic.twitter.com/oesaO2RDar

Yeah you see his mom side eye

The Internet hilariously reacted to the saga going on between Lamb and his girlfriend.

Cee Dee Lamb gf tried to sneak and grab the bat phone on National Tv, he wasn’t having it 🤣🤣🤣🤣

did CeeDee Lamb’s girl just try to go through his phone on draft night?? He gotta put her on waivers tonight!!

She tried to catch him off guard but he was on point 😂😂he so playa 😂😂💯💯 https://t.co/rsMgewK4uz

She’ll be in the waiver wire by tomorrow morning. https://t.co/c6kUE6t06N

Update: Lamb’s girlfriend tried to claim that she was answering the phone but no one was buying it.

His agent was FACETIMING him while he was on the phone with the Cowboys, I was doing the GF thing gonna answer it for him🤣 sheesh https://t.co/lXR0XUTLJ0