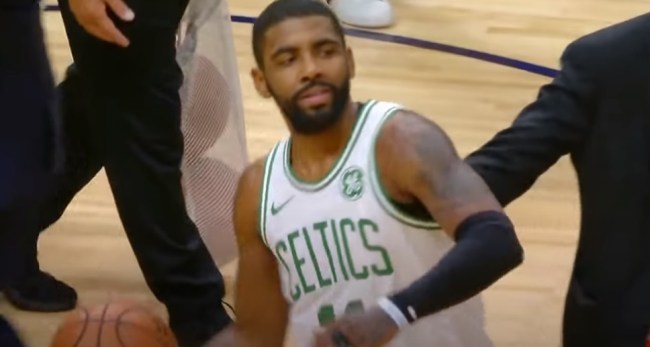 Some Celtics fans are not happy a fan may be facing serious charges for throwing a water bottle at Kyrie Irving after game 4 of the Nets-Celtics series.

On Monday, 21-year-old Cole Buckley was charged with assault with a dangerous weapon for throwing the bottle at Irving on Sunday night.

A fan appears to throw a water bottle at Kyrie as he heads into the locker room after the Nets-Celtics game. pic.twitter.com/SCGaWyStht

The 21-year-old male who threw a water bottle at Kyrie Irving faces assault and battery with a dangerous weapon charge and will be arraigned on Tuesday, Boston PD say.

A second fan in Boston was also arrested Sunday night due to assault and battery of a police offer. https://t.co/lHhMiV4ur5

Celtics fans are now circulating a petition to get Irving arrested because they feel the charges against Buckley are a bit over the top. In the petition, the fans call for Irving to be charged with assault with a dangerous weapon for throwing a ball in the stands back in 2018.

they trying to get Kyrie locked up 😭 pic.twitter.com/DzUvGWSxtE

Here’s the video of Irving throwing the ball into the stands after a game with the Denver Nuggets in 2018.

Remember when Kyrie threw a basketball into the stands (with fans)?!?!

Could this have been considered a dangerous weapon? pic.twitter.com/1yKUCkOzDv