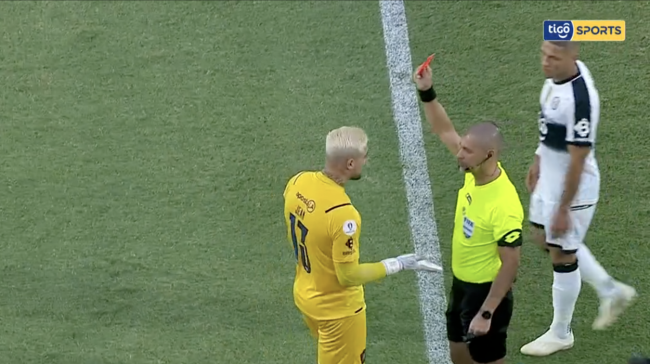 Cerro Porteno goalkeeper Jean Fernandes’ Super Cup final match was over before it even began. The goalie, who was supposed to be in net during the Paraguayan cup final, managed to get a red card before kickoff and was sent off.

The reason is rather bizarre and it potentially cost him his future.

As Fernandes set up in net, opposing Olimpia fans were letting him have it. In turn, he ruthlessly responded with a vicious gesture.

Video of the extraordinary sequence of events shows Fernandes turn back toward the crowd and dance in their direction. That was all fine, but he took it one step too far.

Before encouraging their behavior by pumping them up with his arms, Fernandes looked to the opposing stands and mimicked a throat-slash. Match officials deemed the gesture “offensive” and worthy of expulsion.

After VAR review, Fernandes was given a red card and showed the door.

Cerro Porteno went on to lose 3-1 to their arch rivals. Fingers can most certainly be pointed at Fernandes.

However, he claims that he was not slashing his throat.

Fernandes claims that his ejection was a result of a misunderstanding. Hesays that his alleged throat-slash was actually a Brazilian funk music gesture called a ‘vapo.’ A ‘vapo,’ is often used by footballers in his home land as a celebration.

Fernandes said that when he went to put his rosary by the side of the goal post (something he always does), the Olimpia fan began to throw things at him. He even claims that fireworks were included in the flying projectiles.

In VAR video from inside the net, it cannot corroborate that anything was thrown at Fernandes. Either way, it did not end well in his favor.

Not only did his side lose the match, but Fernandes is on loan. Cerro Porteno reportedly was planning to buy Fernandes, 26, from Sao Paulo FC. Now they are considering abandoning those plans after his bizarre sendoff.