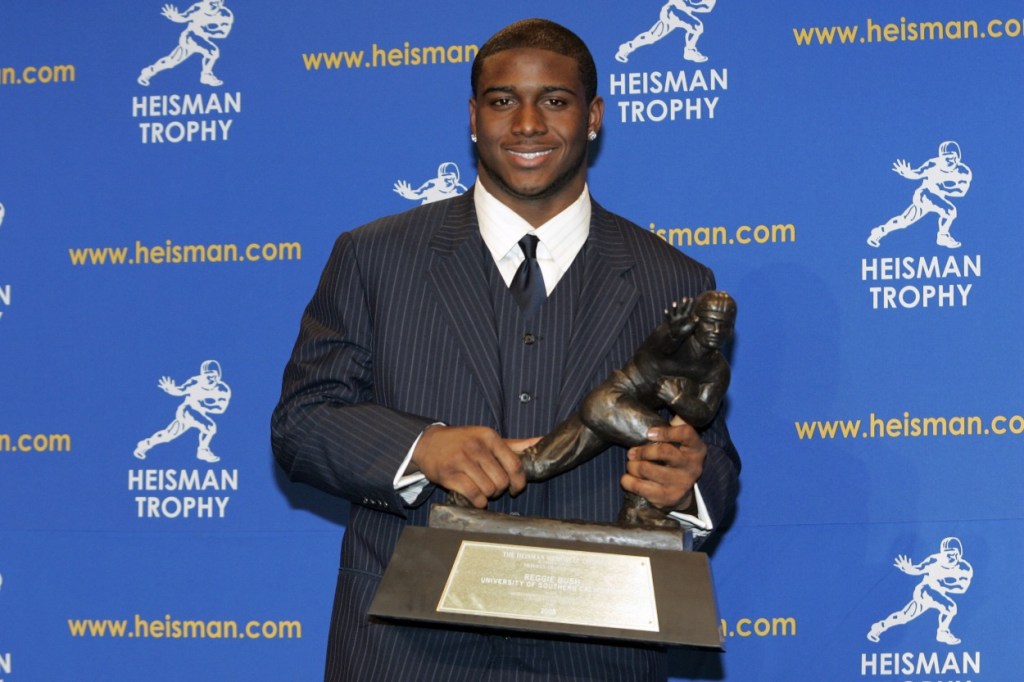 In total, there are 80 players and 9 coaches nominated for the 2023 College Football Hall of Fame class. Amongst those 80 players, 19 of them have the word ‘Heisman’ mentioned in their brief bio shared by the National Football Foundation in their ballot announcement.

Fans were quick to notice that Reggie Bush was not amongst those players who had ‘Heisman’ anything listed next to their names. The bio for Reggie Bush mentions accolades it just very intentionally omits the word ‘Heisman’ winner or former recipient anywhere from the description. Here’s what it says:

Reggie Bush, USC-Running Back-Two-time First Team All-American, earning consensus honors in 2004 and unanimous accolades in 2005…Named the 2005 Walter Camp Player of the Year and won the 2005 Doak Walker Award…Two-time Pac-10 Player of the Year who led the Trojans to back-to-back national championships.

‘Unanimous accolades in 2005’… Did they reaaallly have to omit any mention whatsoever of the 2005 Heisman Trophy that Reggie Bush won but later vacated? And if that was such a big deal, why even nominate him in the first place? The top comment on Reddit’s r/cfb literally says “What is a unanimous accolades?” as a joke about the HoF refusing to say ‘Heisman Trophy’.

Based on the list of qualified candidates for the 2023 Hall of Fame class, here are five players that should be voted in without question (in no particular order)

Morning Notes: The College Football Hall of Fame ballots are out… I see my dude @ReggieBush is nominated – as he should be… Give that man back his Heisman dammit… #USC #Trojans pic.twitter.com/WLN6ymiBC9

Reggie should get in. I hope he gets in. But this year’s class is stacked so who knows what’ll happen…

Now that we are in the NIL era it’s hard to imagine how Bush shouldn’t be in. If the rules changed so should the consideration. I’d apply the same thought to MLB if steroids became legal for Bonds, Sosa etc.

Warrick Dunn and Sebastian Janikowski were absolute legends for FSU during the Seminoles’ reign over College Football. They should both get in. Tim Tebow is a lock. He’s the prototypical example of ‘greatest college player who didn’t pan out in the NFL’ and he deserves to get in on his first ballot. There are just so many incredible players on the list and only 15 get in!

My opinion on Reggie Bush’s Heisman Award doesn’t matter to anyone and it shouldn’t. My two cents on it though is he broke the rules and they acted accordingly. I’d be in favor of returning Reggie’s Heisman if it wasn’t just a one-off scenario and the NCAA corrected all instances of players being punished for improper benefits. Otherwise, we’d be sucked into a wormhole of arguments about ‘why him and not them???’ for decades.

If you want to see the rundown of this year’s nominees and the criteria for being evaluated, check out the National Football Foundation’s press release here.