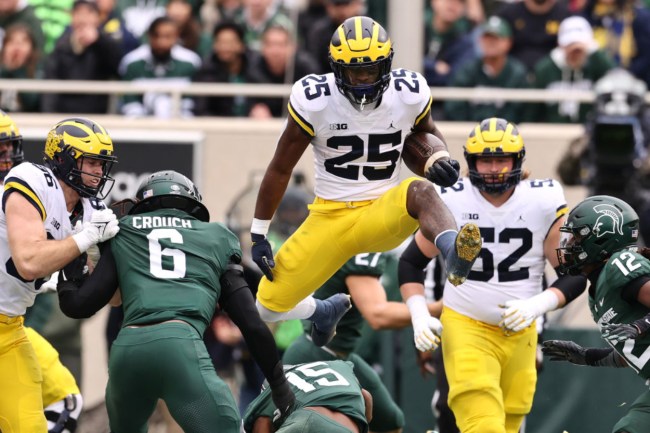 If we’re being completely honest with ourselves, the CFB Playoff rankings do not matter right now with multiple weeks left in the season plus conference championship weekend still looming.

Part of being a college football fan, however, is to argue about rankings, it doesn’t matter if they’re irrelevant for the time being. On top of that, it’s not a great sign that the majority of fans are on board with the idea that the committee has already messed things up. That’s not the greatest of signs of what’s to come when these rankings do mean something.

The committee revealed their new rankings on Tuesday night and the Top 7 teams didn’t change. Michigan State, which beat Michigan, still remains in the No. 7 spot while the Wolverines hold the No. 6 spot.

After the rankings were released, chairman Gary Barta tried his best to explain the reasoning behind Michigan still being ranked ahead of Michigan State and what he said made zero sense.

“Set aside watching the games, though that’s certainly a part of it. But statistically in just about every category, offensively and defensively, Michigan comes out on top over Michigan State,” Barta explained.

Barta essentially said ‘we’ve got Michigan ahead of Michigan State because Michigan is the bigger brand’ without actually saying that.

College football fans were quick to call out the chairman for his comments on Twitter:

Everything matters but strictly the game apparently. https://t.co/lp21zVwMMY

So is the committee headed towards just playing the games on paper by comparing statistics? https://t.co/lw5f3PYhVU

I was wrong about the committee. What a horrid idea. I’d prefer the computer over seeing a quote like this ever again. https://t.co/6vU1hdy0n9