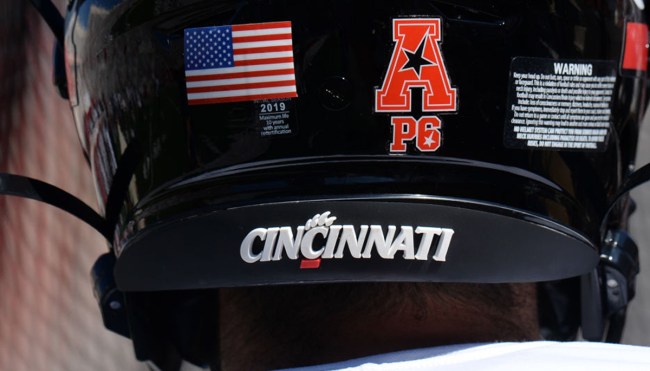 It’s been a fairly chaotic college football season compared to what we’ve become accustomed to in recent years, and I sincerely hope anyone who predicted Clemson would be eliminated from playoff contention before the end of September and that Wake Forest would currently be sitting at the top of the ACC with an undefeated record used their psychic powers to profit by placing a few bets before eth action kicked off.

On Tuesday, that chaotic reality was reflected in the first College Football Playoff Committee rankings of the 2021 campaign, which expectedly featured Georgia at the top and mainstay Alabama in the second spot, with Michigan State and Oregon rounding out the top four.

Where does your team rank?

It’s safe to say fans of those last two teams should be pleasantly surprised by their inclusion based on the results of the most recent AP poll—just like it’s safe to say supporters of an undefeated Cincinnati Bearcats squad are very justified in being less than thrilled with the lack of respect the CFP Committee showed by snubbing them.

It’s pretty clear CFP chairman Gary Barta knew the rankings were going to raise some eyebrows based on what he had to say when he preemptively defended them from the inevitable criticism on ESPN shortly after they dropped.

CFP chairman Gary Barta on ESPN: "The committee has great respect for Cincinnati. The win at Notre Dame was a really impressive win. … Who else did they beat?"

It didn’t take long for Cincinnati head coach Luke Fickell to chime in with his take, as he threw some major shade at Barta a couple of hours later (for what it’s worth, the chairman was a member of a North Dakota State University Bisons team that won the DII championship three times while he was playing there).

Luke Fickell was told at his radio show about Gary Barta’s comments that Cincinnati hasn’t beat anyone besides Notre Dame. Fickell’s response?

“Who’s the chairman? Did he play football?” #Bearcats pic.twitter.com/eX8SLh6gIU

AAC commissioner Mike Aresco also wasn’t shy about sounding off, as he implied the issue was indicative of the preferential treatment the committee has historically given to P5 teams since its inception.

AAC Commissioner Mike Aresco to @YahooSports: "It’s a self-fulfilling prophecy. The committee doesn’t rank our teams that deserve to be ranked, then they turn around and say they don’t play any ranked teams."

Only time will tell how things will unfold in the coming weeks, but the Bearcats can take solace in knowing they’ll have a pretty solid say in their own fate; their remaining slate may not feature any marquee matchups, but it’ll be pretty easy for them to coast to the finish line with zero losses on the season.

On the other hand, it looks like Alabama may face a bit of a test in the Iron Bowl against Auburn, and when you consider Michigan State and Ohio State will play each other on November 20th, it seems like there’s a good chance that matchup will make life a bit easier for Cincinnati regardless of how it ultimately plays out.

With that said, we can expect UCF levels of pettiness if they remain on the outside looking in with a perfect record when everything is said and done.