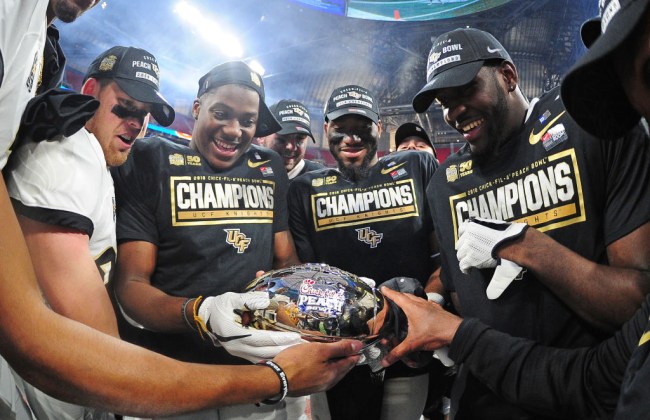 If the fake news media is to be believed, Alabama took home its second national championship in a row after an unlikely come-from-behind victory on the back of freshman hero Tua Tagovailoa.

However, the Crimson Tide’s championship claim has been heavily disputed by UCF, who used the power of transitive property to proclaim themselves the real national champions after beating Auburn in the Peach Bowl.

Shortly after the win, UCF announced it’d be holding a parade and raising a banner in honor of their achievement and even produced rings to give to it players (much to the amusement of some Bama atheltes).

Even Nick Saban inserted himself in the conversation a few months ago when he dissed the Knights, who are apparently still very salty about being disrespected after they were ranked #21 ahead of the upcoming season in the first AP poll of the year.

However, it looks like the Knights may have gotten some of the respect they’ve been so thirsty for since last season came to a close.

The NCAA recently released its most-updated version of its record book and UCF fans will be happy to know that the team now officially has a place in history as national champions (even though there’s an asterisk involved.

According to The Orlando Sentinel, there are more than 40 polls the NCAA uses in order to rank teams— including the Colley, which is a supposedly bias-free system that named UCF the best team in the country after everything was said and done.

If you know anything about the people behind the Knights Twitter account, you knew it was only a matter of time until they reacted to the news, and they turned to the world’s most paradoxical Star Wars reference in order to do so.

The ⛵️ only speaks in truths pic.twitter.com/vHJtNKEPHr

Nothing but respect for my national champions.