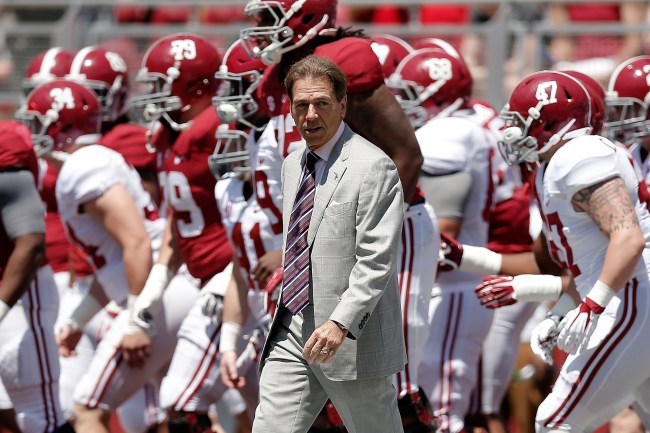 It seems like it’s been years since almost-transfer-student Tua Tagovailoa became the unlikely savior of the Alabama Crimson Tide in the second half of last year’s College Football Playoff National Championship.

However, it’s only been eight months since the (then) freshman quarterback capped off an impressive comeback with one of the craziest plays to ever end a season.

It was a great high to end the season on but it also resulted in some pretty serious college football withdrawal.

There have been plenty of compelling storylines (in addition to some brand new stories about Jim Harbaugh being weird) to make the offseason interesting, but at the end of the day, they all just leave me wanting more football.

Thankfully, kickoff is right around the corner and the hype train is officially in motion now that the AP has released the Top 25 preseason rankings.

BREAKING: No. 1 @AlabamaFTBL tops preseason AP Top 25 for third consecutive year, a feat done only once before; @ClemsonFB is No. 2, followed by @FootballUGA, @BadgerFootball and @OhioStateFB. See the full poll: https://t.co/jfkE4ZQ5Ce pic.twitter.com/JDiE6VLaxK

The results of the coaches poll should shock virtually no one who has been paying even a little bit of attention to college football.

This is the third year in a row the Crimson Tide will open the season with a “1” next to their name (and could be the second in a row where they finish in the same spot).

Here’s the full list (first-place votes are in parentheses).

I knew it was a foregone conclusion that the Crimson Tide would take the top spot, so when I saw the results of the preseason poll had been released, I immediately went to check on the ranking of last year’s true national champions: the UCF Knights.

Despite being the disputed best team in the nation, it appears UCF has been disrespected once again. However, based on their response, they’re only going to use it for even more inspiration.

Hell hath no fury like a mid-major scorned by a preseason coach’s poll.