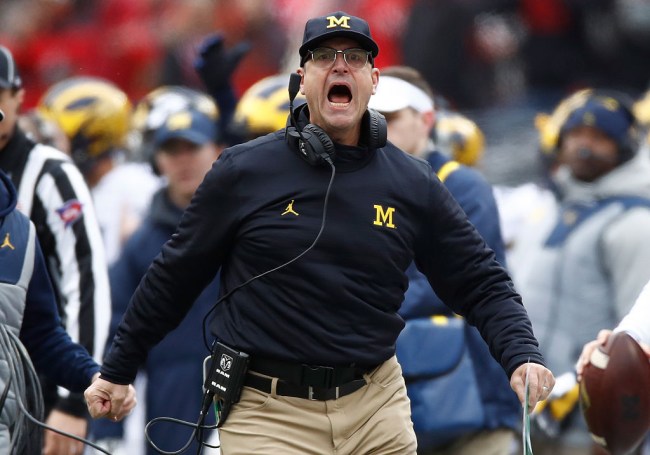 I typically try to reserve labels like “batshit insane” for situations when there isn’t any other way to describe something but I can’t think of any other words that can succinctly and accurately sum up the essence of Jim Harbaugh. The Michigan coach is basically the Bill Murray of college football thanks to a never-ending stream of stories documenting Harbaugh’s various eccentricities that continue to add to his ever-growing mythos.

If you’re not familiar with Harbaugh’s pattern of odd behavior, here’s a primer. Over the years, he’s:

However, the latest Harbaugh tale might be the most ridiculous one yet.

In a profile of Michigan quarterback Shea Patterson, Bleacher Report spoke to ex-Wolverine Wilton Speight about his experience playing under Harbaugh and… I’ll just let you experience this one for yourself:

“Early in his Michigan tenure, Harbaugh pulled Speight aside and told him not to eat chicken, a protein that is considered fairly safe by nutritionists. When Speight asked why, Harbaugh said, ‘because it’s a nervous bird.’

‘He thinks some type of sickness injected its way into the human population when people began eating white meats instead of beef and pork,’ Speight says. “And he believes it, 100 percent.”

When you consider Harbaugh’s go-to meal is steak and milk (a.k.a. The Charlie Kelly Special) I guess this shouldn’t be particularly surprising but I am now dying to know what criteria he uses to determine whether or not a bird is “nervous.”

Harbaugh needs to sign a lifetime contract at Michigan A.S.A.P. to ensure the world never runs out of amazing anecdotes like these.