Michigan Is Considering Signing Jim Harbaugh To A Lifetime Contract 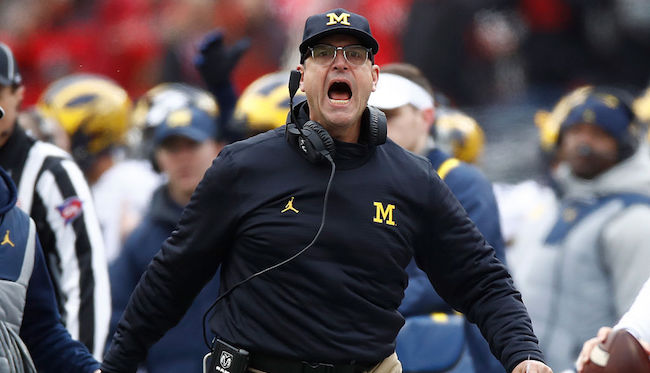 It’s hard for me to articulate just how much I love University of Michigan coach Jim Harbaugh, who might be on of the craziest people to ever step foot on the gridiron. Harbaugh has been a constant source of incredible entertainment over the years, and while it would be impossible to name all the reasons I adore him, here are some of the highlights:

Harbaugh is a national treasure, and he also happens to be a pretty damn good football coach. It appears that Michigan realizes this, as Fox Sports analyst (and Cleveland Browns casualty) Brady Quinn reports the Wolverines are considering signing him to a contract that would last for the rest of his life.

Quinn recently appeared on Fox Sports Radio, relaying what he was told by someone familiar with the program:

“I talked to someone who’s kind of an insider within that program and we had a long, drawn-out conversation. What he told me was, they’re working on a lifetime contract. I swear to you, I’m not trying to throw a wrench into [Harbaugh returning to the NFL]. That was his words.

He couldn’t give me particulars, but he said that’s one of the things that they’re talking about. That’s how confident, that’s how good they feel about Jim Harbaugh and how glad they are to have him there. So, maybe it’s something that he wants.”

This would be an unprecedented deal, and I’m all for it if it means Jim Harbaugh will have the opportunity to continue his shenanigans over the next couple of decades.