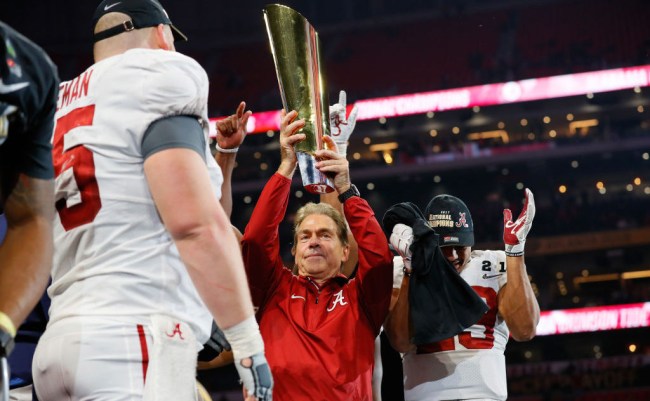 History will show that on January 18th, 2018, the Alabama Crimson Tide hopped on the back of an unproven quarterback and rode their way to a 26-23 overtime victory against the Georgia Bulldogs to be crowned the champions of college football yet again. However, if you were to ask the UCF football program, they would say history— much like that John Denver— is full of shit.

The Knights have been pushing the narrative that they’re the real national champions since defeating Auburn in the Peach Bowl, and while they might not have the creatively named College Football Playoff National Championship Trophy in their possession, they’ve done basically everything else you’d expect a school to celebrate after taking home the title.

Since wrapping up their undefeated season, the Knights have held a parade and raised a banner, bought its players some blinged-out rings, commisioned a special edition police car, and even convinced the state of Florida to create a custom license plate to commemorate their “achievement.”

As you might expect, Alabama isn’t exactly thrilled with UCF’s hubris, and multiple players have mocked them for their various celebrations and ceremonies. However, it isn’t just Bama’s athletes who have a problem with UCF if some recent comments from Crimson Tide head coach Nick Saban are any indication.

Saban spoke with USA Today to address the topic with all of the passive aggressiveness you’d expect from someone from the South:

I guess anybody has the prerogative to claim anything. But self-proclaimed is not the same as actually earning it. And there’s probably a significant number of people who don’t respect people who make self-proclaimed sort of accolades for themselves.”

Saban isn’t the only coach to voice his displeasure with the team, as former UCF coach Scott Frost said he also belongs in the aforementioned significant group of people. Here’s to hoping this just inspires the Knights to double down on the impressive trolling they’ve displayed so far.
,