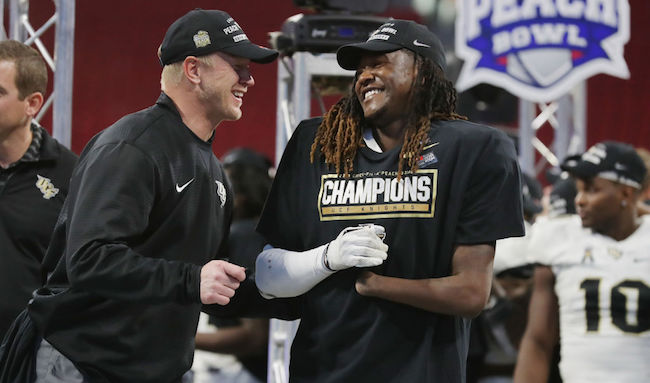 Earlier this month, the UCF Knights ushered in the New Year by defeating Auburn in the Peach Bowl and becoming the first team to finish the season with an undefeated record in the era of the College Football Playoff. They might have been denied a spot in the four-team tournament, but that didn’t stop UCF from proclaiming themselves National Champions almost immediately after the game ended (a claim that’s supported by some questionable math).

Since then, the Knights have celebrated like any actual national champion would, which includes creating a banner and holding a parade at Disney World. For the most part, the Alabama Crimson Tide— this year’s actual champs— have been looking at the team the same way a cop would look at a kindergartener who says he’s a real police officer because he cut out a paper badge he drew with a yellow crayon.

That changed on Sunday when Bama running back Damien Harris decided someone needed to give UCF a reality check after the team’s Twitter account posted a bunch of pictures featuring players sporting championship gear at the Pro Bowl.

These pictures are live! Where can i find one with y’all holding the trophy? https://t.co/eo4O6daenL

Crimson Tide defensive end Isaiah Buggs decided to get in on the fun as well by taking a dig at UCF’s strength of schedule.

Since y'all wanna be champs so bad y'all schedule BAMA then‼️‼️ https://t.co/jqcXVsc20f

UCF said they were more than open to the challenge— echoing a billboard the team’s fans recently put up in Tuscaloosa. However, Diggs decided to put the nail in the coffin by posting a picture in a Mortal Combat-worthy fatality.

With that, UCF followed in the footsteps of everyone in Williamsburg by taking the L.