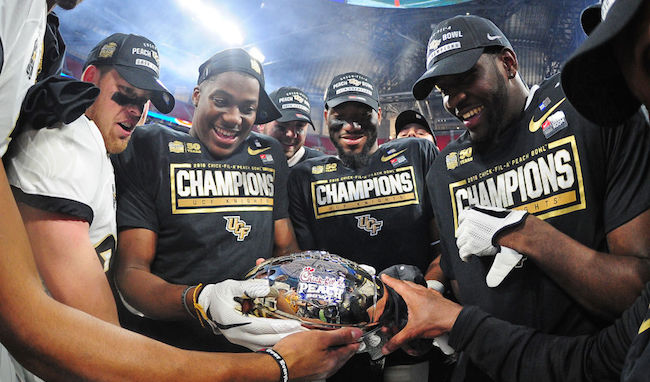 In the college football world, the phrase “We Want Bama!” is a rallying cry often heard from fans of mid-level teams in the wake of unlikely victories over (usually) ranked opponents, knowing full well they’d never actually come close to defeating what has been the most dominant NCAA team in recent memory. If you want to look at it another way, it’s basically the equivalent of an octopus defeating a seal lion in battle and convincing itself it could take on a great white shark.

The phrase is usually used facetiously thanks in large part to the fact that most programs outside the SEC will never see the Crimson Tide appear on their schedule, but one team’s fanbase has started to say it without a single hint of irony: the University of Central Florida.

The Knights finished the 2017 season with a 13-0 record after beating Auburn in the Peach Bowl, and they started to make the argument that they were worthy of being called national champions almost immediately after time expired (an argument that is supported by some questionable math). The team even went as far to commission a banner and hold a championship parade at Disney World, but their fans aren’t satisfied with stopping there.

According to Darren Rovell, a group of 37 UCF supporters contributed a total of $1,665 to a GoFundMe campaign dedicated to raising money for a billboard challenging Alabama to a home-and-home series. They had originally planned to rent out ad space in Atlanta before the National Championship, but missed the deadline and were forced to settle on a billboard in Tuscaloosa (which, in all honesty, was probably for the best).

I sincerely hope UCF supporters aren’t holding their breath awaiting a response because it’ll be hard for the Knights to continue their success when their entire fanbase is dead.