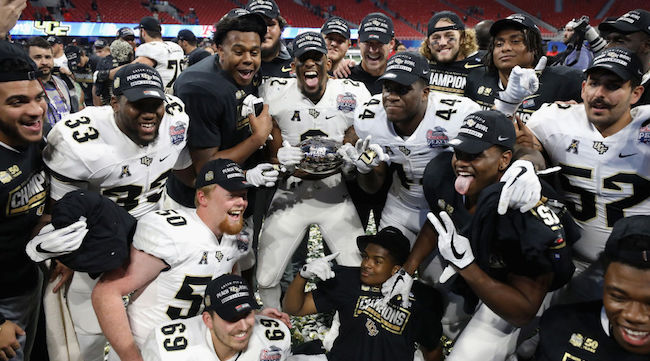 College football programs around the country have already started turning their attention to next season, but last year’s national champions* don’t appear to be willing to let go of the past at any point in the near future. Despite the best efforts of the Alabama Crimson Tide to convince the world otherwise, the University of Central Florida has been more than happy to embrace the theory that they were the best team in the NCAA last year, and they’ll be damned if they’re going to let things like “facts” and “reality” get in the way of their celebration.

The undefeated Knights staked their claim after beating Auburn in the Peach Bowl and have continued to antagonize their peers by taking inspiration from actual national champions when it comes to commemorating their achievement. Last week, the school’s police department unveiled a custom “National Championship” squad car (which would pair very nicely with Florida’s newest alternative license plate) but that paled in comparison to what UCF unleashed on the world over the weekend.

The school shared some videos of players getting their ring, and even if their claim is fake, the jewelry is very, very real.

“This is motivation right here! We gotta get another one of these!”

Enjoy the moment Nate Evans got his natty 💍 pic.twitter.com/Rvu8cHZV02

“This is what it’s all about right here!”

If you thought UCF was going to stop there, you obviously don’t know that much about UCF. During their spring game, the team unveiled the newest banner to hang inside Spectrum Stadium— a banner I’m sure won’t piss off Alabama if they ever accept the invitation to play there.