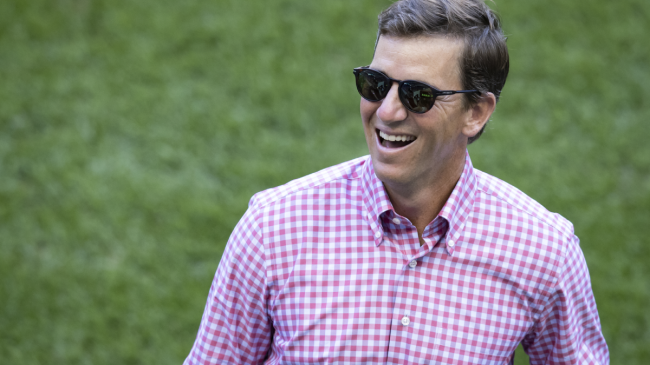 Eli Manning went viral last week for going undercover at a Penn State football tryout. The tryout was for walk-ons looking to grab a spot on the Nittany Lions’ roster.

Manning took the field as “Chad Powers,” a walk-on quarterback hoping to join the team. He quickly impressed with the arm talent that helped him land a pair of Super Bowl titles in the NFL.

The passer threw a couple of absolute darts to potential Penn State pass catchers before deciding to unveil his true identity at the end of the tryout. The funny video not only gave some positive attention to the Nittany Lions’ football team, but it also helped shed some light on what goes into the walk-on program at major universities, both from a coach and player perspective.

While they don’t always get the glory, walk-on players put in the grunt work to make their teammates better ahead of game week. Tryouts like these, as head coach James Franklin points out, allow players to chase their dreams of playing high-level Division I football.

Now, thanks in part to Chad Powers, those walk-ons will get a little extra support for the upcoming season.

Penn State’s NIL collective began selling “Chad Powers” shirts shortly after the video clip went viral. The shirts read, “Think Fast, Run Fast,” which was Manning’s mantra throughout his undercover tryout. The collective sold more than $27,000 worth of apparel in the first 24 hours.

That money, according to Sports Illustrated and Front Office Sports, will help support real walk-ons at Penn State.

Again, with walk-on players not always catching the spotlight as much as their teammates on scholarship, this monetary aid is extremely beneficial. It helps spread some of that NIL love around to everyone on the team.

If you’d like one of these shirts for yourself, you can find them HERE.