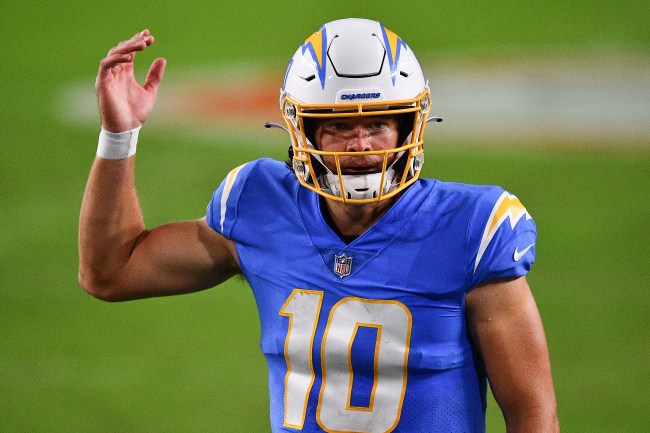 Chargers QB Justin Herbert has had the best flow in the NFL since entering the league.

Herbert’s hair was so nice that he got an endorsement deal from “Head and Shoulders!” shampoo to be their spokesman earlier this year.

Justin Herbert (and his hair) get an endorsement deal https://t.co/z38X2MUSll pic.twitter.com/RSeT8Bsvbi

Herbert is head & shoulders above many of the quarterbacks in this year’s NFL Draft. And now, he’s Head & Shoulders’ newest spokesperson.

The past few years, I’ve realized how much work it is and fortunately Head & Shoulders sends me enough products that I’ve been able to take care of it.”

After the team’s latest losing streak, Herbert decided to cut off his hair for whatever reason to the shock of the NFL community.

Big favorite tonight at the podracing track on Tatooine. https://t.co/E23POwl5B8

I don’t want to overreact, but this is the worst voluntary haircut decision in the history of pro sports. https://t.co/QKHOf4omNZ

The Chargers were cursed. If you want to break a curse you have to sacrifice something you loved. This seems pretty straightforward https://t.co/UkTFkuzfPm

he looks like he’s about to hop on fortnite for 5 hours https://t.co/dZzjQGBr6B

Why does your QB look like the kid in gym class who never washed his uniform and is a mediocre wrestler @CaribbeanStunna https://t.co/SRyMpGtDmz

He looks like he's about to watch Orlando Bloom fall out of a helicopter in Somalia https://t.co/UK1bA2t0M0

My mans went to Supercuts 💀 https://t.co/IW8hNooPTU

“Can you give me the Brendan Dassey?”