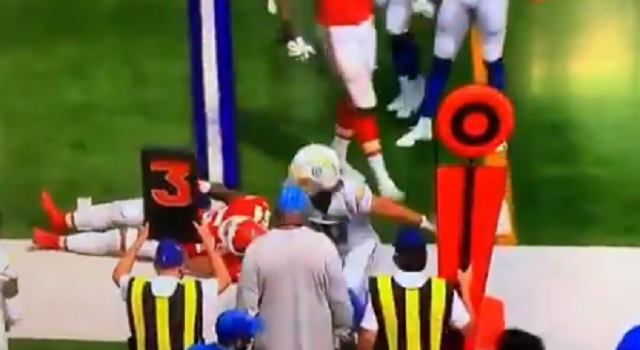 Chargers rookie QB Justin Herbert must be made of steel.

During Sunday’s Chargers-Chiefs game, Chiefs linebacker Damien Wilson chased down a scrambling Herbert and tried to lay a big hit on the rookie QB. Not only was Herbert able to eat the big hit, but he somehow was able to knock Wilson out in the process.

Damien Wilson arrived at Justin Herbert with a shoulder ready to go, and left absolutely rocked after the rookie starter met him body to body. Toughness from the former Oregon Duck.

Wow! You can see his soul leave his body after the hit. RIP Damien Wilson. Justin Herbert will send flowers to your family. Ha! #KidDontPlay #Chargers #NFL pic.twitter.com/gQZIH4u9EM

Herbert was able to throw his first TD a few plays later. Kid is a baller.