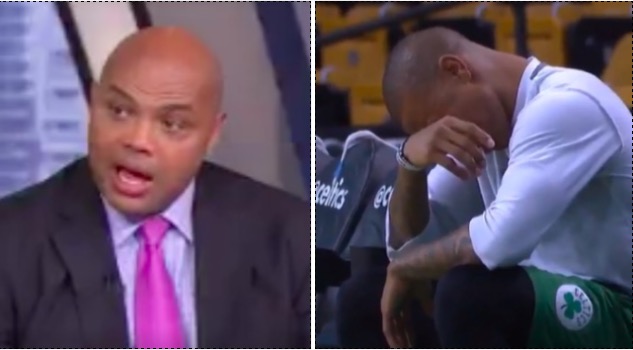 Celtics star guard Isaiah Thomas learned at practice Saturday afternoon that his younger sister, Chyna, had died in a one-car accident. The 22-year-old wasn’t wearing a seat belt when the car she was driving drifted onto the shoulder and hit a large metal pole at around 5 a.m.

Despite an experiencing an insurmountable amount of grief, Thomas made the decision to play in Game 1 of playoffs Sunday night against the Bulls. Before tipoff, TNT’s Inside the NBA aired footage of Thomas overcome with emotion during the pre-game shoot around. This prompted Charles Barkley to make a confusingly insensitive comment about Charles, himself, being “uncomfortable” by the sight of Thomas breaking down.

"Basketball is our sanctuary… It is our safe place." @SHAQ & Charles on the passing of Isaiah Thomas' sister. pic.twitter.com/NhJvqmPf9m

Barkley obviously didn’t intend to come off as an insensitive tough guy, but once the Internet outrage machine gets churning, it’s a runaway train.

Oh man Charles Barkley is about to get blasted heavy. Man his comments are just too reckless.

So Isaiah Thomas crying becsuse he lost his sister makes you uncomfortable? It's a bad look? Charles Barkley is a joke of human being.

Despite the emotional night, Isaiah led all scorers with 33 points in the Celtics 106-102 loss.

“He was incredible,” Celtics coach Brad Stevens said. “He’s an amazing, amazing player. [An] amazing person. Days won’t get easier for him, but he somehow plays like that.”