Charles Barkley Rips ‘Bus Rider’ Kevin Durant, Implies That His Titles Are Fugazi Because He Wasn’t The ‘Bus Driver’ 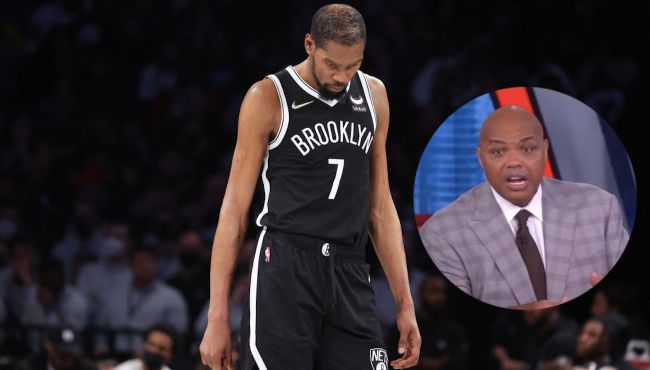 With the Brooklyn Nets currently down 0-3 to the Boston Celtics in the first round of the Eastern Conference playoffs, the former favorites to win this year’s NBA title are getting criticized by all corners of the NBA world, including by the OGs over on Inside the NBA.

While ranting about the Nets’ pitiful postseason performance thus far, famously outspoken analyst Charles Barkley took direct shots at Kevin Durant by questioning the validity of his NBA titles because he considered KD to be a “bus rider” on those teams and not the “bus driver.”

“I don’t want to badmouth the dude [Durant], but you guys are always talking about that championship stuff,” Barkley said. “I tried to tell y’all, all these bus riders, they don’t mean nothing to me. If you ain’t driving the bus, don’t walk around telling me you a champion. All these guys walking around with these championship rings, hey, y’all bus riders. When you’re the bus driver and you’ve got all that pressure when you have to play well or you’re going to get the blame, that’s a different animal.”

Charles Barkley says KD is a bus rider instead of a bus driver when it comes to his career 😬😬pic.twitter.com/u0v1ijo3qR

While it’s been a few years now since KD’s time in Golden State, it’s important to remember that the 33-year-old was widely criticized at the time for joining forces with the NBA’s powerhouse team instead of trying to forge his own path.

KD, Kyrie Irving, and the rest of the fledgling Nets will look to fight off elimination and the subsequent end of their season when they take on Jayson Tatum, Jaylen Brown, and the surging Boston Celtics in Game 4 of the Eastern Conference first-round playoffs tonight in Brooklyn.

At the time of this writing — about seven hours prior to tip-off — the seventh-seeded Nets are favored by just one point over the #2 seed Boston Celtics.