Charles Barkley Suffers Leg Cramp On ‘Inside The NBA,’ Shaq Gets Up And Punches It Out 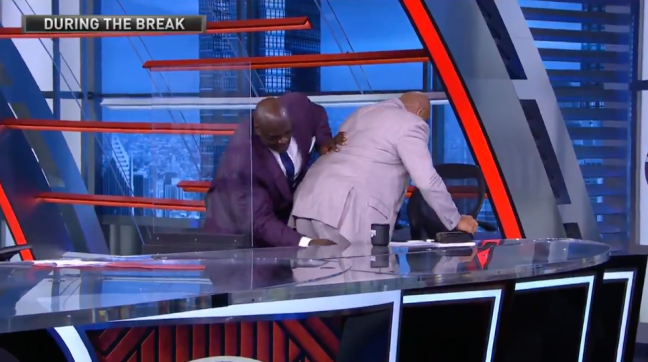 TNT’s ‘Inside The NBA’ never disappoints. TNT could be covering the worst slate of games of the NBA season, but as long as Shaquille O’Neal, Charles Barkley, Ernie Johnson, and Kenny Smith are in the same room talking about the action, something exciting and hilarious is going to happen.

Thursday night’s show delivered yet another video that will go down as an all-time moment between the crew.

During a commercial break, but with the cameras thankfully still rolling, Barkley jumped out of his chair with a leg cramp. Before Barkley could even make a step to try and walk it off, Shaq stood up out of his chair and starting punching Barkley’s hamstring to try and relieve the pain. The punching then turned into a massage, which gave us quite the image.

Dr. O’Neal came to the rescue after Chuck cramped up 🤣 pic.twitter.com/BmEw7aLd0d

There isn’t a commentary duo that comes anywhere close to Shaq and Chuck. Night in and night out the two constantly take shots at one another, but it’s clear that if one of them needs some help, they’ll jump out of their seat and offer a helping hand.