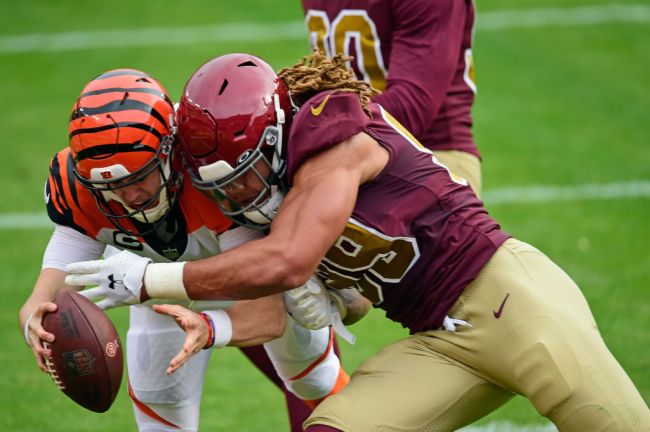 Former number one draft pick Joe Burrow was carted off the field against the Washington Football Team on Sunday.

Before being carted off, Cincinnati Bengals and Washington players huddled around Burrow and wished him the best, including Chase Young, Dwayne Haskins, and Terry McLaurin.

Sideline reporter caught up with Chase Young and asked the defensive tackle what he said to his former teammate before he was carted back to the locker room. Young put a vicious hit on Burrow earlier in the game.

Young told the reporter that when he went over to the cart, he patted Burrow on the head and told him he loved him and to get better. He then said a prayer for his friend.

.@youngchase907 said that when he went over to the cart, he patted @JoeyB on the head and told him he loved him, to get better and then said a prayer for him. 🙏🏻

Burrow tweeted “see ya next year” not long after returning to the locker room.

Neither Burrow nor Cincinnati Bengals head coach Zac Taylor gave any specifics about the rookie quarterback’s injury but early indicators point to a torn ACL.

Haskins replied to Burrow’s tweet, showing love for his friend and opponent.