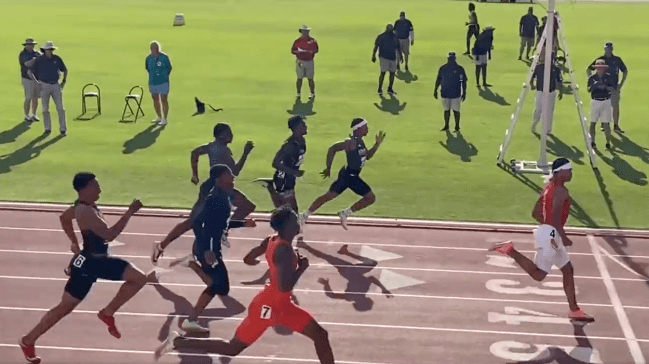 Che Nwabuko is a three-star wide receiver recruit in the Class of 2022. He signed his letter of intent to play for Pittsburgh back in December and chose the Panthers over offers from Michigan, Michigan State, Minnesota, Purdue, UTSA and UAB, among others.

While that offer sheet may not seem like anything particularly special, Nwabuko is special. The Manor, Texas-native is ridiculously fast.

As the younger brother of Texas Tech running back Chux Nwabuko, Che was also considered to be a running back on the next level by some. His footwork and speed make him a very dangerous threat in the open field at whatever position he lines up.

However, more than likely, the 5-foot-10, 175-pounder will line up as a receiver. He could be an option over the middle out of the slot, but he could also burn defensive backs on go routes near the sideline.

Somehow, Nwabuko went under-recruited in his home state. Typically, when a high school football standout is labeled as having “track star speed,” they are burners on a football field that can turn short-yardage catches into 70-yard touchdowns.

On Friday, Nwabuko set a new school record with a 10.17-second 100-meter sprint and finished in first by nearly two full body lengths. He left everybody in the dust.

Nwabuko’s 100-meter time would not have medaled at the 2021 Summer Olympics, but it would have qualified for the semifinals. Not only that, but he pulled up just a little bit at the end and probably could have come across the line a few milliseconds faster.

And he did it as a senior in high school.

Later that night, Nwabuko ran a 20.53-second 200-meter dash and won gold. That time would have been in Olympic qualification contention, based on the times from the 2021 Summer Olympic Games.

To cap the night, Nwabuko finished his record-setting day with a gold medal in the 4×100-meter relay. Manor High School won three gold medals in the meet and they all were ran by their senior standout.

Although he was overlooked because of his size and position uncertainty, Nwabuko landed in a Power Five conference and is set to prove the haters wrong. Good luck to the cornerbacks that line up across from him. They don’t stand a chance if he gets loose.