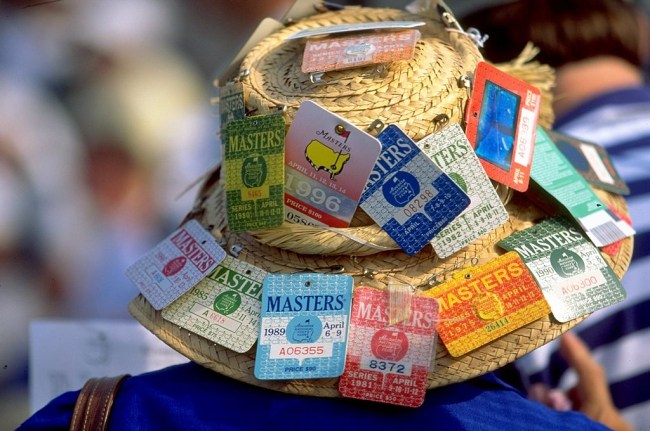 Virtually every golf fan has a bucket list concerning the trips they want to make before they die, whether it’s getting the privilege to needing four shots to get out of a bunker on the Old Course at St. Andrews or being able to watch your ball make a splash in the water after you don’t even come close to hitting the green on the 17th hole at TPC Sawgrass.

While both of those goals are fairly achievable, there’s one white whale the vast majority of us will never be able to harpoon: a round at Augusta National.

Unless you know an incredibly well-connected member of high society who can get you an invitation to join its exclusive ranks and can also afford a $400,000 initiation fee, you’re likely not going to ever step foot on Augusta’s hallowed greens (unless you happen to know some who met all of the aforementioned requirements.

As a result, the best chance most people will ever have to gain access to the grounds is by scoring a ticket to the annual Masters tournament, the most storied event the golf world has to offer.

I’ve spent years dreaming of the day I’ll actually get an email after entering the lottery informing me I’ll have the chance to step onto the course, take advantage of some incredibly cheap concessions, and raid the pro shop for Masters gear you can’t get anywhere else.

Sure, if you don’t win the lottery, you can always turn to the secondary market but I’m usually scared off because I can’t justify paying multiple month’s worth of rent money just so I can say I went.

As you’re probably aware, a pesky thing going by the name of “COVID-19” is currently causing a global panic, and last week, Augusta National said it was intent on ensuring the tournament would go ahead as planned.

However, things have escalated rather quickly since then, and on Thursday, there were reports that The Masters could be played with a limited number of spectators or perhaps no fans at all.

As a result, scalpers have slashed their asking prices like Circuit City prior to its bankruptcy. According to Yahoo Sports, the average ticket to attend the first round of The Masters in 2018 was priced at $4,500, but as of right now, they’re going for below $1,500.

From what I can tell, it’s doubtful you’d be able to get a full refund if fans are indeed banned from the course, but hey, it could be worth a shot.