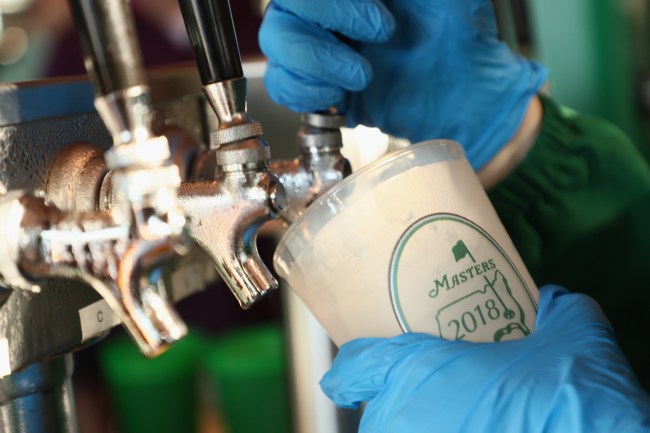 Paying for food and drinks at a sporting event is a necessary evil. The necessary part being getting tuned up to watch your favorite team strengthens the experience, and the evil being that you have to drain your 401k to do so.

For reference, last year, Super Bowl fans spent $6.2 million on food and beverages, an average of $87.57 per person. And that was separate from the $4.6 million spent on merchandise.

One would think that the Masters, golf’s most prestigious event, would fleece fans at the concession stand. Especially considering that golf fans are typically guys who can afford to play.

Just the opposite, my friend. The concessions at Augusta National Golf Club have always been the most affordable in sports.

@TheOpen the masters do it right and treat spectators fair in terms of costs. If your keeping spectators contained at Carnoustie and not allowing them to leave at least make it reasonably priced for food and drink pic.twitter.com/N4hLi3t0kq

You can walk away with two domestic beers and a pimento cheese sandwich (shout out Mike from Better Call Saul) for less than ten bucks.

Look at all the food Darren Rovell got for the price of a few Fenway franks.

What you can get for $43 at the Masters this week:

But concession prices are erroneous if you’ve got to spend the entire event in line. Looks like the Masters has that covered too.

I thought chick fila was efficient but the concessions at the masters is next level.

Kinda makes me wish I actually appreciated the game of golf instead of just using it as an opportunity to get blind drunk.