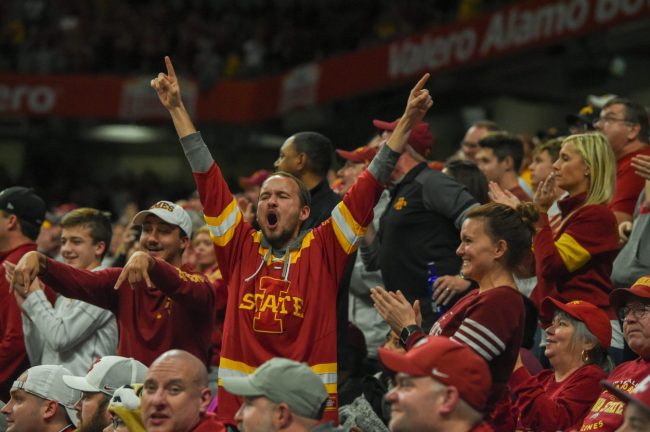 Very few people love Busch Light beer more than Iowa State fans. It is the beverage of choice for the corn-fed Cyclones faithful and has become the unofficial domestic beer of the school and its fan base.

As one of Anheuser-Busch’s many different hop-fueled libations, Busch Light was born in 1989. It was market tested in the southern Midwest, quickly caught on and ended up thriving.

Because Busch buys corn and grain from Iowa for their beers, it quickly became a very easy connection. Iowans are supporting their own economy by drinking.

Thus, over the years, Busch Light has become synonymous with Iowa State.

The Athletic did a story about the tie in 2019 and it provides a great look into how it became such a phenomenon. One fan had the following to say about the beer:

“It’s like a badge of honor,” he said. “It is like the Iowa badge. We have nephews that are 21, 22 years old. They don’t drink anything but Busch Light.”

Former WWE wrestler Jerry Lawler found that out the hard way in 2017. Iowa State had not made a bowl game in five years prior to that year and qualified for the Liberty Bowl in Memphis with an eight-win regular season.

Around 25,000 Cyclones fans ended up descending on Memphis and the party started as early as Thursday for a game on Saturday. Lawler, who owns a bar in Bluff City, ordered 12 cases of Busch Light, thinking that it would be fine.

It was not. He ended up getting a different, much larger shipment, and even that wasn’t enough. The supply was obliterated.

In 2018, the Iowa State faithful nearly drank the Alamo Bowl dry. Less than 200 cans were left.

Busch is not a beer normally carried at the Alamodome so we had to guarantee complete sell-through. Thus we concentrated having it available thru hawkers on all levels and the Bud Light Beer Garden on the fifth level. It’s true there were lots of stands that soldout quickly.

From that point forward, bowl games have been prepared and properly stocked. This year, the Cyclones will face the Clemson Tigers in the Cheez-It Bowl.

When the matchup was announced, the game immediately started thinking it through. How much beer would they need?

The limit does not exist.

Prior to kickoff on Wednesday, the game shared just how many cases it had ordered. It was a lot.

In the photo, at least 34 cases were in view.

Will it be enough Busch Light? Only time will tell.