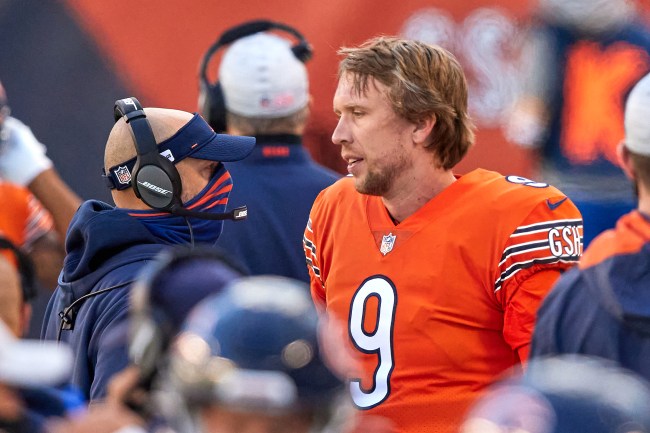 During the Bears-Rams Monday Night Football game, ESPN announcer Brian Griese revealed that Foles told him that there are times Nagy sends in a play call and Foles already knows the play won’t work because he won’t have enough time to execute it.

Brian Griese just said that Nick Foles told the ESPN crew that sometimes Nagy sends in a play call and Foles already knows it won't work because he won't have enough time after the snap. That's something.

Brian Griese on Nick Foles telling him Nagy sends in play call and Foles already knows the play won’t work because he won’t have enough time after snap. pic.twitter.com/NRo7rntR8F

We were talking to Nick Foles yesterday and he said sometimes play calls come in and I know that I don’t have time to execute that play call and I’m the one out here getting hit, sometimes the guy calling the plays, Matt Nagy, he doesn’t know how much time there is back here…So that’s something they have to get worked on

Update: While speaking to the media Nagy reacted to Foles’ comment.

Matt Nagy's response: "We've never had that conversation… I don't know. You'll have [ask Foles]… Nick and I have a pretty good relationship and he hasn't said that. I'm sure he'll explain what he meant by that."

Bears fans were stunned that Foles would openly question his coaches’ playcalling while talking to the Monday Night Football crew before the game.

Matt Nagy embarrassed himself on MNF. ESPN broadcasting crew LAUGHED at his play-calling. In fact, his play-calling is so putrid that Nick Foles KNOWS when a play won't work (HOW DOES NAGY NOT KNOW???). You know who said that? NICK FOLES. He admitted it. I'm nauseous.#Bears

This says it all. Nagy is clueless, get him off the diner menu and give it to lazor, can’t be any worse. 3 years of this shit show and I’ve had it with Nagy. https://t.co/3RzwGTmnQX

you never hear this from a starting QB about his own head coachpic.twitter.com/Xh4jPI1j17

This will be the last straw for many fans when it comes to Nagy. And it could end up a tipping point with his sway in the locker room. If his chosen QB doubts him, why should anyone have faith.

It's also a good way for Brian Griese to not have people talk to him anymore. https://t.co/PvuZKwXlSG

Update: Foles addressed Griese’s comments during the broadcast and says that he doesn’t have a problem with his coach.

Nick Foles says he saw the Brian Griese clip and can see how Griese took his comments that way, but emphasized that he and Nagy have a great relationship and "I would never say anything like that."