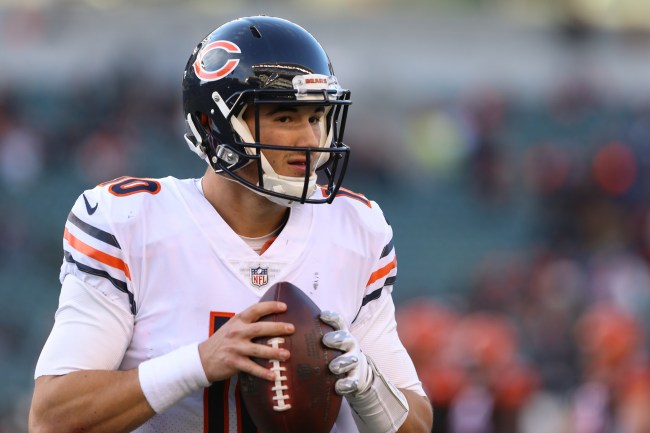 Earlier this offseason the Chicago Bears traded for QB Nick Foles to compete for the starting job against Mitch Trubisky.

Apparently the QB competition is over and much to the surprise of NFL fans everywhere Trubisky was able to beat out Foles during training camp and will be named the starter for week 1.

It’s due to his progression, leadership and overall performance throughout camp. Nick Foles made decision difficult for Matt Nagy, but the team feels strong about its QBs.

The #Bears informed Mitch Trubisky he will be the starting quarterback in Week 1, per source (as @AdamSchefter indicated). The former No. 2 overall pick wins the camp competition against Nick Foles.

Considering that Trubisky has been pretty mediocre for years, fans had jokes about the Bears naming him the starting QB for week 1.

Mitch is a helluva hill to die on. Maybe they’re pulling a Costanza and trying to get fired? https://t.co/zFlcuXiuOe

LMFAOOOOOOOOOOOOOOOOOOOO looks like they’ll be battling the LOLions for 3rd place in the division for the 2nd year in a row! https://t.co/7QwYPPczk4

Is it my birthday? I think it might be my birthday guys 😂 https://t.co/yy1h8iSdEF

Imagine passing on Cam Newton and Jameis Winston for $1M so you could give up a fourth-round pick for Nick Foles AND guarantee him $21M only to keep starting Mitchell Trubisky. GM of the Year, Ryan Pace. #Bears https://t.co/NamD08Jtua

𝗕𝗘𝗔𝗥𝗦: “We are trading for Nick Foles…”

𝗕𝗘𝗔𝗥𝗦 𝗙𝗔𝗡𝗦: “Okay not great but at least it’s better than…”

𝗕𝗘𝗔𝗥𝗦: “…so he can back up Mitchell Trubisky as the starter.”

Mitchell Trubisky dropping back on the first offensive play of the regular season pic.twitter.com/ZJ5uK4NzNK