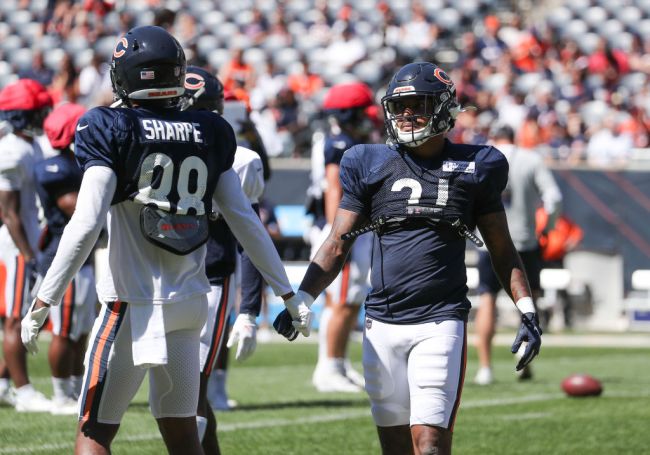 The Chicago Bears offense doesn’t have much clarity at the wide receiver position right now. We know that Darnell Mooney is the team’s top receiver heading into the season, but behind him there isn’t really anybody who has taken control of the rest of the snaps available after the departures of Allen Robinson, Damiere Byrd, Marquise Goodwin, and Jake Grant.

The team went out and signed Equanimeous St. Brown, Byron Pringle, and Tajae Sharpe this offseason, traded for N’Keal Harry, and drafted Velus Jones Jr. Pringle, Jones Jr, and Harry are all currently injured, leaving the Bears thin at receiver, but also opening up an opportunity for the receivers who are healthy.

One of those receivers is taking advantage of that opportunity today.

In the middle of the 2nd quarter of today’s game between the Bears and the Kansas City Chiefs, Tajae Sharpe made a ridiculous one-handed grab along the sidelines for a 25 yard gain as the Bears tried to finally get on the scoreboard.

Another look at that Tajae Sharpe catch and it's even more absurd. #DaBears

That catch was Sharpe’s second of the day, with the other being a 19-yard grab in the 1st quarter. His 44 yards currently have him leading all Bears receivers at halftime.

Unfortunately, Sharpe’s impressive grab didn’t lead to any points for the Bears, who worked their way into Chiefs territory before punting. The drive was one of 3 in the 1st half where the Bears punted inside Chiefs territory, helping the Chiefs get out to a 14-0 lead by halftime.

With so much uncertainty about the hierarchy of the Chicago Bears’ receivers right now, Sharpe could just need a couple more performances like this to secure himself a role in the offense for 2022.