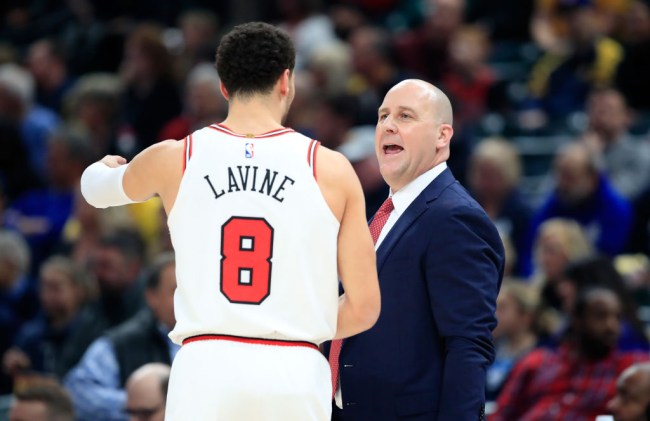 Chicago Bulls players wasted no time in collectively saying “no thanks” to default head coach Jim Boylen. Following the firing of Fred Hoiberg on Monday after a dismal 5-19 start to the season, Boylen has reportedly acted as more of a drill instructor than a head coach.

After the Celtics handed the Bulls a 56-point loss on Saturday, the worst in franchise history, the former Spurs assistant called for a Sunday practice on the heels of a back-to-back, a taboo in the NBA.

Bulls players reportedly contacted the National Basketball Players Association on Sunday for what they believed to be extreme tactics by their new head coach.

Yahoo Sports has the details on the incidents that led up to the entire Bulls team turning their backs on the man in charge of righting the ship.

After taking the helm from fired coach Fred Hoiberg on Monday, Boylen held three two-and-a-half-hour practices in his first week that included extra wind sprints and players doing military-style pushups. Calling for another lengthy practice after the back-to-back led to a near-mutiny and caused the players to reach out to the union, sources said.

Boylen had already gotten under his players’ skin by issuing the ultimate indignity: subbing out all five players on the floor twice in Saturday’s loss. In the first half, the Bulls fell behind 17-0, so the full lineup change was understandable.

In the second half, the Bulls had only been outscored 5-3 when Boylen subbed everyone out and the players felt embarrassed.

Calling for a Sunday practice was apparently the last straw.

Late Saturday evening one of the team’s veterans, sources said, initiated a group text relaying that if any player showed up to the facility on Sunday prepared to practice, he would fine them personally, and the players agreed.

Additionally, Boylen forced the Bulls team to watch film directly after their loss to Indiana on Tuesday, going against postgame protocol. Teams always watch film the following day when they have cooled off and are ready to be critiqued. It didn’t help when Boylen told the media his team needed to get in better shape.

When players, Zach LaVine and Justin Holiday being the most vocal, called Boylen out, the coach repeatedly referenced his days as an assistant under Greg Popovich.

According to sources, a player responded essentially telling Boylen that they aren’t the Spurs and he isn’t Pop. Yikes.